I’m writing this review about a month before I can publish it in my blog and that kills me for two reasons. Firstly I’m all about instant gratification (hey… one couldn’t be as *ahem* chubby as me without that predilection); and secondly… I. LOVE. THIS. BOOK.

In all honestly I don’t know why I’m so surprised. I’d requested an advance copy of The Missing One because the blurb looked interesting, but it didn’t jump out at me. In fact, it only leapt ahead in the queue because it’s being published before the 5 or 6 others I have in my reader waiting to be read and reviewed.

I expected it to be like previous novels I’ve read (and one called The Memory Box comes to mind) in which a daughter who’s recently lost her mother sets out to better understand her and their difficult relationship. And it was that. But so much more!

Kali’s mother Elena has just passed away from breast cancer – a diagnosis which she kept from her family while refusing treatment. Kali’s relationship with her mother was a tumultuous one and she never understood why they struggled to bond, particularly when the relationship between her mother and younger sister seemed surprisingly normal. Now a mother herself Kali is not only dealing with her mother’s death but cracks are appearing in her marriage. 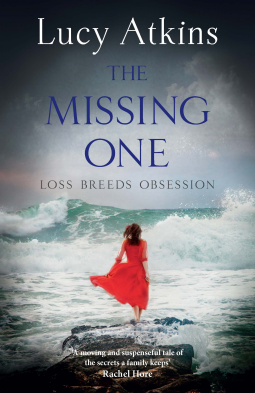 After finding postcards from someone who appears to be a long-lost friend of her mother’s Kali impulsively sets off with toddler Finn, flying across the world to learn more about her mother’s past.

In Canada Kali meets Elena’s former college flatmate Suzanne and discovers that her mother had an entire life about which she knew nothing.

While initially Kali views Suzanne as eccentric, she soon starts to find her behaviour increasingly unpredictable; and it becomes obvious that the concerns Kali’s father, sister and husband have about her quest halfway across the globe may be warranted. Indeed we are left with that niggling concern one gets when digging up the past.

I’m possibly sharing a bit too much of the plot here, but I’ll do it anyway… because we learn that Elena was passionate about killer whales and tracked and documented pods and their movements. Through Elena (and her story as told by Suzanne) we learn a lot about whales in captivity and the world of those in the open sea.

I have to confess I’m not particularly interested in nature, animals, wildlife and so forth BUT a year ago I moved to a seaside locale which hosts whales during the winter-spring months. Indeed to many locals, Hervey Bay is the whale-watching capital of Australia. So… it seemed bizarrely fitting that I found myself reading more about these majestic creatures and I have to admit I am now kinda intrigued.

But… whales aside, I enjoyed this book so much I didn’t want to put it down. It is, most-certainly, absorbing.

Kali’s going through some difficult stuff and I was with her – every single step. She knows that not all of her behaviour is entirely rational; but she accepts and acknowledges it and keeps going anyway. Although her actions aren’t entirely considered, we understand her need to learn more.

It’s not a mystery as such, but there’s some suspense as Kali unravels her mother’s long-hidden life.

The Missing One is British journalist Lucy Atkins’ first novel and… what a great first novel it is! Obviously Atkins is a skilled writer and seems to have a lot of feature articles to her name, but in The Missing One she proves she can also spin a tale.

The Missing One by Lucy Atkins, published by Quercus Books will be released on 16 January 2014.

*I received an advance copy of this novel from the publisher via NetGalley for review purposes.