I hadn’t realised this book was the third in a series when I requested it. I hadn’t read the previous two novels by Janet Evanovich and Lee Goldberg about FBI agent Kate O’Hare and her con-man and thief-turned CI Nicolas Fox, but it didn’t really matter. I am, however, interested to get some of the backstory so hope to track down the two previous novels in the series.

It was a pretty short read at only 304 pages, but that suited me and it suited the genre. The Job  isn’t going to win any literary prizes, but it isn’t meant to. It’s pure entertainment and it’s bloody good fun! I don’t know Goldberg’s writing history (other than that he wrote for the TV show Monk) but Evanovich brings her witty dialogue to the novel so there’s a heap of (charming) light banter between the characters, particularly Fox and O’Hare.

The Job  is a bit of a twofer. It kicks off with a range of heists committed by someone trying to frame Fox. Long-story-short, this gives the Fox and O’Hare an opportunity to catch the boss of a global drug-smuggling ring (with a penchant for fine chocolate and buried treasure). So our dynamic duo – with the help of some friends – stage an elaborate con to catch the attention of the drug-smuggling chocolate lover. 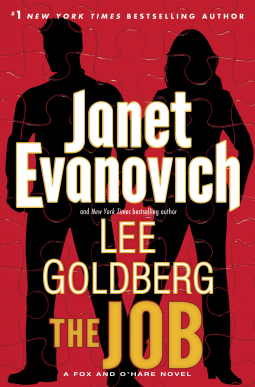 I’m a fan of the TV show White Collar  and the premise of the job is very similar. However – my biggest struggle was in relation to the feasibility of the con itself. Firstly O’Hare seems to pretty much have a free reign over her cases. And then… there’s how they go about luring their target. They spend RIDICULOUS amounts of money in doing so. Like millions and millions. As a former government employee in Australia and regular viewer of US shows featuring government employees (even those working for agencies with acronyms!) you pretty much have to hand over your first-born child to get a new stapler, let alone enough money to buy a ship, travel the world and hire a cast of helpers.

However – once I stopped being so pragmatic and allowed myself to skim over the details I was able to just go with the flow and not worry about the believability of the plot. The con itself was interesting but for me the allure of the book is very much about the characters, their relationships and the witty narrative.

The Job by Janet Evanovich and Lee Goldberg will be released via Random House Publishing (Bantam Dell) on 18 November 2014.

I received an electronic copy via NetGalley from the publisher for review purposes.