I ADORED Lily and the Octopus by Steven Rowley giving it a rare 4.5 stars. It was astoundingly clever and such a delight. Rowley wrote with humour and sensitivity and – though not a dog / animal lover – I was completely enchanted by Ted the human and Lily the dachshund. (And, sadly… the octopus that ‘consumed’ her.)

I leapt at the chance to read The Guncle. The blurb had me wondering if it’d be like RWR McDonald’s wonderful ‘The Nancys’ series… featuring Uncle Pike and his partner Devon… albeit without the whodunnit.


Patrick, or Gay Uncle Patrick (GUP, for short), has always loved his niece, Maisie, and nephew, Grant. That is, he loves spending time with them when they come out to Palm Springs for weeklong visits, or when he heads home to Connecticut for the holidays. But in terms of caretaking and relating to two children, no matter how adorable, Patrick is honestly a bit out of his league.

So when tragedy strikes and Maisie and Grant lose their mother and Patrick’s brother has a health crisis of his own, Patrick finds himself suddenly taking on the role of primary guardian. Despite having a set of “Guncle Rules” ready to go, Patrick has no idea what to expect, having spent years barely holding on after the loss of his great love, a somewhat-stalled career, and a lifestyle not-so-suited to a six- and a nine-year-old.

Quickly realizing that parenting—even if temporary—isn’t solved with treats and jokes, Patrick’s eyes are opened to a new sense of responsibility, and the realization that, sometimes, even being larger than life means you’re unfailingly human.

I loved so much about this book. Again Rowley manages to deal with death and loss in depth but in a way filled with hope. All of the characters, including those we meet briefly are beautifully drawn and complex – from Patrick’s agent to his throuple neighbours.

Like Lily and the Octopus, the dialogue is outstanding. Here, of course instead of conversations between a person and dog (and the octopus) it’s the banter between Patrick and Grant and Maisie that delights. Grant’s missing his front teeth so everything comes with a lisp and Rowley includes this in the prose.  Patrick’s background in television and past (and still current) fame and recognition is balanced brilliantly with his wit and dry pragmatism. Of course on top of that he’s still mourning the loss of his partner from years before.

Patrick’s astounded by his brother’s request to look after Maisie and Grant but (despite his sister’s concerns) it’s obvious he’s the right choice. He treats them as little adults. His insight – into everyone except himself – means he understands them and their needs far more than he realises. And he’s a fast learner. A good soul that loves fiercely.

Rowley nails the voices of Maisie and Grant and by having Patrick join them in battling with their grief means he’s forced to navigate his own.

The sky is not going to fall. That’s what I’m telling you. The pain you feel, the disaster you think is imminent. Those feelings fade. And some days you even miss it. Some days you miss the pain, because you’re afraid. Afraid that as the pain softens so do memories of the one you lost. p 264

This book is beautifully written with clever and witty dialogue balanced with the devastation everyday life offers. It’s about death; how we survive the loss of those we love and how we learn to live again. But it’s also about how we see ourselves and others, it’s about growth and change. About learning from our past and knowing and trusting ourselves.

The Guncle by Steven Rowley was published in Australia by Simon & Schuster and is now available. 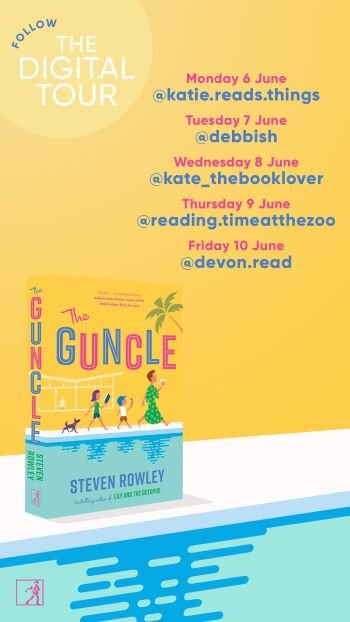 I received a copy of this book from the publisher for review purposes AND am participating in a blog tour, so recommend you check out others’ thoughts on the book!