In his freshman year of college George Foss fell in love with The Girl with a Clock for a Heart.  And now, 20 years after she disappeared from his life (and after many false alarms), he spots her in a Boston bar.

George knows Liana’s appearance in an obscure local tavern can’t be a coincidence. He realises she’s trouble but at the same time knows he’s powerless to refuse any request. 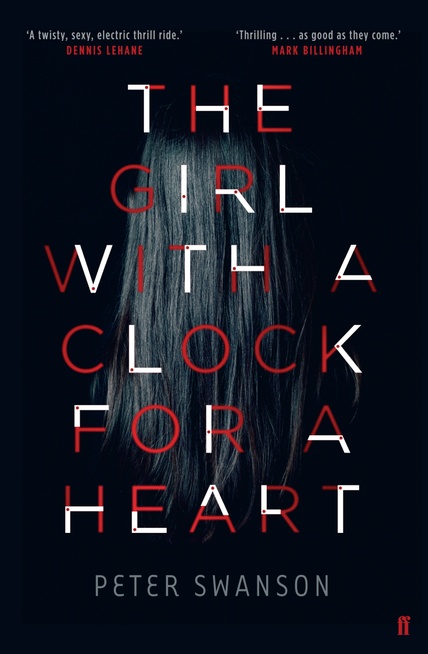 She’s on the run, she tells him, having taken money from a former lover and employer out of spite after being ditched. He’s sent one of his men after her and, though she regrets her actions and wants to return the money, she can’t do it herself.

He knows it’s a mistake and he knows he’ll regret it but George agrees to return the stolen money and – naturally – things go downhill from there.

Before he knows it, George’s life is in danger and he’s a murder suspect. And despite all of this, he’s thinking of Liana: angry at her duplicity; but still concerned about her wellbeing.

The story unravels in two timelines, the current day and the events of 20 years prior.

I really liked most of this book although none of the characters were particularly likeable. We predominantly see Liana through George’s biased eye; and George seems a bit of a pushover and – while he knows better than to trust anything Liana says and does – he manages to fall into trap after trap.

The answers however, may be found early in the novel and prior to the appearance of Liana, when – although not yet 40 – George ponders his life (it’s written in third person):

“He’d passed that age when he could reasonably expect to fall madly in love with someone and raise a family, or to take the world by storm, or to have anything surprising lift him out of his day-to-day existence.

… he spent most days in a haze of disinterest. And while he was not yet pausing in front of funeral homes, he did feel as though he hadn’t looked forward to anything in years. He had no interest in new friends or new relationships. At work, the paychecks had grown but his enthusiasm for his job had wavered.” (Pg. 7)

I marked the paragraph because: 1. I could really relate; and 2. It scared the bejesus out of me. Faarck! I’m 46, still single and yet to uncover life’s passions.

I mean, I’ve made some changes in my life over recent years, so the work thing is mostly improved, but still… Faaarck! Is it really too late for me to take the world by storm or make my own mark?!

I enjoyed the book overall but felt a bit disappointed in the latter half of the novel and the ending felt a bit rushed.

The Girl with a Clock for a Heart is Peter Swanson’s debut novel and a good one at that. I read somewhere that the film rights have been purchased. I actually loved the title – which comes from how George ‘describes’ Liana at one point in the novel.

The Girl (etc)… published by Harper Collins (US) and Faber and Faber (UK) is available from 4 February 2014.

I received an advanced copy of the book from Faber & Faber for review purposes.