This quaint-looking small hardcover book isn’t the sort of book that would normally appeal. But it came as a surprise. Quite a delightful one in fact.

I wasn’t sure what to expect – after all, it’s a translation…. and they don’t always go well. You’re so dependent on an intermediary to offer up quality prose – but this translator (Ros Schwartz) did a great job. I’m almost intrigued if it was as eloquent in its original language.


When Juliette takes the métro to her loathed office job each morning, her only escape is in books – she avidly reads on her journey and imagines what her fellow commuters’ choices might say about them.

But when, one day, she decides to alight the train a few stops early and meets Soliman – the mysterious owner of the most enchanting bookshop Juliette has ever seen – she is sure her life will never be the same again . . .

For Soliman also believes in the power of books to change the course of a life – entrusting his passeurs with the task of giving each book to the person who needs it most – and he thinks Juliette is perfect for the job.

And so, leaving her old life behind, Juliette will discover the true power a book can have . . .

Juliette watches others – particularly those she sees on her daily commutes. I could very much relate to the tedium of travelling the same route day after day. Year after year. She actually admits she gets little reading done herself on the trip – spending most of her time watching others and paying attention to what they’re reading.

Juliette herself is living a careful life. In some ways it’s a ‘small’ life. A safe life.

She needed to retreat to a place of safety: to a soft, calm, peaceful cocoon.

Because that was how she’d always lived. Nestling in the smallest nook she could find….

She had never been aware that she was afraid, that she feared the world’s vastness and diversity, its violence too. pp113-114

It’s the rash decision to leave the train early and walk a different route that changes her life. And I guess this mirrors the premise underlying Soliman’s work… some things are just meant to be. Fate. Kismet. Karma. Etcetera.

I’d never heard of the term passeur before. It’s French of course and translates as ‘Ferryman’. It’s Juliette however, who notes the name was given to those who smuggled Jews out of German-occupied zones.

My best passeurs have a tremendous capacity for empathy: they feel, in their very bones, the frustrations and resentments that build up deep in a body which, at first glance, looks no different from any other body. p 34

The underlying premise of this book centres around the notion of books being ‘sent into the wild’. The passeurs have the responsibility of matching the books they’ve received with those who most need them. Soliman tracks the books’ journeys.  They tend to return, he explains. Again as if by fate.

The ‘what happens to the information he collects’ and ‘how this exactly happens and is paid forward’ is a bit vague. As is the question as to how Soliman affords to do this. But I decided that was okay as I liked the romance of knowing books ‘found’ their owners.

I’m a passionate reader – obviously – but far from precious about my tastes. Here the names of authors and books – particularly the classics or well-known foreign literary tomes – are bandied about as if we all know exactly what they’re about.

However… I know nothing….. (Like Manuel in Faulty Towers!) 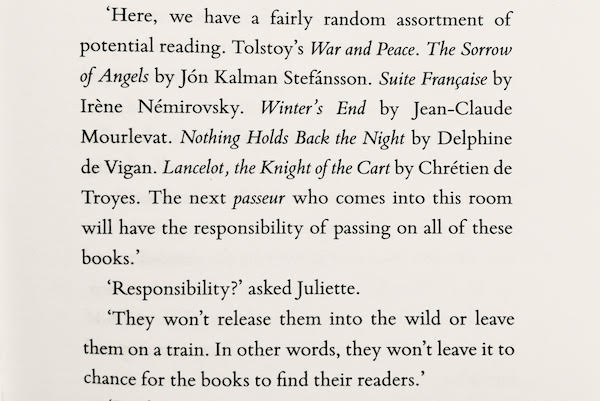 Thankfully I didn’t matter that I’d not heard of many of the books or their authors.

I really enjoyed the writing of this book which means I should acknowledge both Feret-Fleury and Schwartz (the translator) The narrative is just lovely, offering a sense of magic and whimsy.

“You see,” she said, “I was also covered in dust. It had built up without my being aware of it. Do you understand?”

“All this” – and she raised her arm to indicate the room they were in and beyond, the stock room, the courtyard, the rickety iron staircase, the rooms that opened onto the gallery, the patch of sky over the neighbouring walls and roofs – “blew on me like a great icy wind. I feel naked. I’m cold. I’m afraid.” pp 123-124

Although it does touch on some serious issues – those of refugees and migrants and of families separated it isn’t depressing. While we’re reminded how many of us live lives of tedium and discontentment, there’s also a slither of light visible. Of hope shining through.

The Girl Who Reads on the Metro by Christine Feret-Fleury was published in Australia by Pan Macmillan and now available.