UPS delivery guy Jeremy is a little in love with the girl from apartment 6E. He’s never seen her and the other tenants in her building tell him she hasn’t left her apartment in the 3 years she’s been there, but… he’s heard her voice and is intrigued.

Packages for 6E are addressed to both Jessica and Deanna, but Jeremy’s long figured out they’re the same person and decides she’s on the run.

Jeremy doesn’t realise that the girl in apartment 6E isn’t in living in fear of others, but rather has isolated herself as she’s in fear of herself and her own murderous tendencies.

Jessica/ Deanna lives without human contact, a video-cam sex worker raking in the cash by allowing others to give into their innermost desires. Something she cannot do. After all she tells us…. she’s already killed once. And she fantasises about doing it again.

Most of her clients are harmless, but when she realises one may be responsible for the abduction of a young girl she knows she has to act. Which means leaving her apartment and she really doesn’t know if she can trust herself. 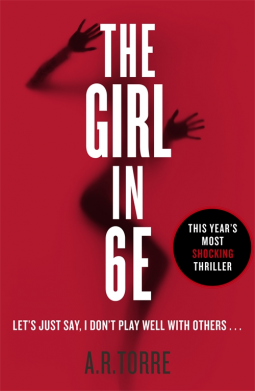 Readers are invited into Jessica / Deanna’s world and it is very real. Indeed, most of the book is really just about what she does. And from all accounts, she does it well (albeit with great pragmatism). Author Alessandra Torre researched the life she’s given to her lead character, and it’s intriguing… this world of online sex.

Torre doesn’t allow us to be ultra cynical – there are no old fat ladies in sweatpants talking dirty at the other end of the telephone while doing the dishes. She also however minimises any romanticism, ensuring we’re aware it’s a business, and one where technology and commitment reap rewards for its workers.

While we’re learning about Jessica / Deanna’s unusual world, we also learn how she arrived there and why she locks herself away.

I really enjoyed this novel. Because much of the novel focuses on Jessica / Deanna and her camming life while we slowly unpick her backstory, it’d be easy for the novel to drag a little, but it doesn’t. At all. It’s well paced and intriguing, if not page-turning.

From the blurb I’d assumed the novel to be more of a thriller than it is (and I haven’t read any of Torre’s previous work), but my taste for a good mystery was whetted. I also tend to hate sex scenes in novels and am not into erotica, but Torre’s descriptions of Jessica / Deanna’s work is so blunt I wasn’t in fear of gagging (no pun intended) at the usual cliched sexual metaphors.

With so few characters, Jessica / Deanna is beautifully developed and the unpredictability of what happened in her younger years is cleverly conveyed.

I only have a couple of quibbles (as I am wont to do!). The editing was occasionally a bit strange and there was some continuity lacking in places (a character would be described as if being newly introduced when we’d already met them). And… me being a control freak really wanted a bit more closure in the end. However I note there will be a sequel, so I’m forgiving Torre that one.

Alessandra Torre’s The Girl in 6E, published by Orion Books UK, Hachette Publishing Group, including Hachette Australia, will be available from 29 July 2014.