I read BA Paris’s Bring Me Back in 2018 and rated it highly. I follow Paris on Twitter so have been seeing news of her latest release The Dilemma quite a bit. I wasn’t exactly sure when it was out however, so delayed reading it until after 2020 ticked over.

Interestingly this is another book which reminded me I’m a presumptuous smart-arse. I kept considering exaggerated eye-rolls thinking how obvious the plot/s of this book was / were going to be (there are a couple of threads). I assumed I knew EXACTLY what the twists and secrets were. And… I was wrong. Yet again.


It’s Livia’s 40th birthday and she’s having the party of a lifetime to make up for the wedding she never had. Everyone she loves will be there except her daughter Marnie, who’s studying abroad.

But although Livia loves Marnie, she’s secretly glad she won’t be at the party. She needs to tell Adam something about their daughter but she’s waiting until the party is over so they can have this last happy time together.

Adam wants everything to be perfect for Livia so he’s secretly arranged for Marnie to come home and surprise her on her birthday. During the day, he hears some terrible news. He needs to tell Livia, because how can the party go on? But she’s so happy, so excited – and the guests are about to arrive.

There’s a prologue in this book meaning it starts near the end, so we kinda know the shit hits the fan. Of course what we don’t realise is that the aforementioned shit could result from any number of things.

We quickly learn that Livia has a secret she’s kept from her husband for six weeks. I made an assumption cos d’oh… of course I knew what it was. I mean, it’s obvious isn’t it?! Then we get some additional insight requiring me to re-predict what it is. And I was wrong again.

And Adam has a secret he’s keeping from Livia. We learn what it is from the get-go however. And then we’re with him as he tries to keep it… wanting Livia’s longed-for 40th birthday party to be everything she’s dreamed it to be for the last 22 years.

I found myself being kinda judge-y here. The OTT party she’s planned for years – decades really – seemed kinda self indulgent / gratuitously self-indulgent. We soon learn why… because she never got to have a proper big white wedding, despite dream-planning it all with her mother (WHILE IN HER TEENS?!). Cue more cynicism and groans from me. There is more to it of course; a backstory which underpins Livia and Adam’s life together and their relationships with their children. (Adam’s in particular.) 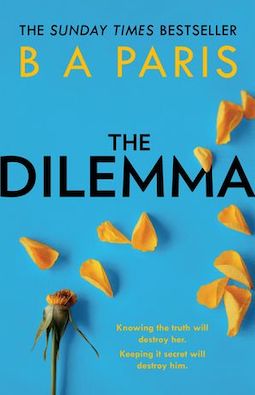 While I’m whinging about the characters (as if they’re real people… so great realism from Paris!), we learn Livia’s distancing herself from her best friend who’s got multiple sclerosis. She’s lost so many people in her life she tells us, she’s preparing herself for what’s to come – losing another.

As someone who saw some family (and a few friends) distance themselves from my father with dementia or later when dying, her selfishness pissed me off. Read my post titled The Rain, to see why. In summary: it’s not all about you princess!

However… yet again I *might* have been prematurely judgemental, as there’s more to the story than Livia avoiding her dying best friend to protect herself emotionally.

It probably goes without saying then that this novel keeps you guessing. There’s a great deal of suspense, though there’s no dastardly baddie on the prowl. Readers are kept on the edges of their seats awaiting the truths to be revealed. Waiting for the inevitable disappointment and / or heartbreak.

This book is really well-paced. The ‘reveals’ and twists keep coming with regularity but underpinning all of that is a story of family and friendships and what happens when those relationships are tested or disintegrate. There’s the underlying question of obligation vs inherent desire, and exactly how far we can push boundaries or hurt those we love, before the ties are severed.

This would be an interesting bookclub read as – as indicated by the title – there are several ethical, moral and personal dilemmas here. I found Livia’s moral high-ground interesting given the impact the breakdown her relationship with her parents (when they took the same stance) has had on her life.

So, a thought-provoking and tumultuous read from Paris.

The Dilemma by BA Paris was published in Australia by Harper Collins (HQ) and is now available in ebook format with paperback soon to be released.