Lila Emerson has no fixed address. The author of novels about teenage werewolves is a house-sitter and travels the world staying in houses and apartments of the wealthy in their absence. Lila waters their plants and cares for their pets and her services are highly sought after. Importantly, it offers her the tranquility and freedom to pursue her craft.

Lila also enjoys people-watching and her artistic mind loves to ponder on the lives of those she sees around her.

She’s already noticed a young couple in a nearby building when one night she sees the man push the woman out of the window to her death. She reports the crime to police who also find the body of the woman’s partner in the apartment seemingly dead by his own hand. 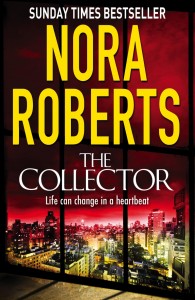 Ashley Archer doesn’t believe Lila’s or the police’s account of events. His half-brother Oliver would never murder anyone he claims, and when Lila realises she couldn’t clearly identify the man who pushed the victim they join forces to try to uncover what really happened.

Of course the more they dig, the more their own lives (and those around them) are at risk. And suddenly they’re embroiled in a world of antiquities and crimes dating back more than a century.

Amidst all of this, Lila and Ash are attracted to each other… but with Lila already planning her next house-sitting move and the complications of Ashley’s large, wealthy and unorthodox family, they realise that a longer-term commitment may not be possible.

I really liked all of Roberts’ characters, particularly leads Lila, artist Ash and sidekicks Julie and Luke. I have to admit however, the ‘whodunnit’ aspect didn’t grab me particularly. There are no huge twists and turns at the end of the novel – we know the guilty parties and the suspense is more in whether they’ll get away with the crime or pay for the lives taken along the way.

As an aside Ash’s desire to paint Lila would also been more interesting if it was just about the attraction rather than her resemblance to a gypsy-like character which felt a bit clichéd.

I’ve only read a few of Nora Roberts’ novels, though am HUGELY addicted to her JD Robb series. The Collector has a fairly good balance of romance and suspense – which is something I appreciate in her ‘In Death’ series – however probably tips a little too much into the former and less into the latter. That’s more about my taste than the novel itself however, which is most definitely enjoyable.

The Collector by Nora Roberts will be released via  Penguin Group in the US and by Hachette Australia and Hachette UK on 15 April 2014.

I received an advanced copy of this novel from the publisher for review purposes.