I adore Candice Fox’s writing and am a huge fan of her many series and two standalones (The Inn and Gathering Dark – both of which may, of course, still become part of a series). Fox manages to create eccentric, weird or even slightly sociopathic characters that are eminently likeable. Protagonists AND antagonists we come to care for deeply. She has a natural yarn-spinning ability. I’ve seen her speak at events and met her so I know she’s quick-witted and kinda irreverent and this is reflected in her writing.

I’ve had her latest release, The Chase, for a while but held off on reading it as I’m participating in a blogging tour that kicks off today. With yours truly. My brother visited at Easter so I kindly let him have a shot at this book first and he read it in a day and really enjoyed it. And I’ve seen nothing but good reviews, which bodes well for Fox’s latest.


When more than 600 of the world’s most violent human beings pour out from Pronghorn Correctional Facility into the Nevada Desert, the biggest manhunt in US history begins.

But for John Kradle, this is his one chance to prove his innocence, five years after the murder of his wife and child.

He just needs to stay one step ahead of the teams of law enforcement officers he knows will be chasing the escapees down.

Death Row Supervisor turned fugitive-hunter Celine Osbourne is single-minded in her mission to catch Kradle. She has very personal reasons for hating him – and she knows exactly where he’s heading . . .

So far I think I’m alone in this so it probably says something about my taste, but I didn’t actually enjoy this as much as some of Fox’s other books. Having said that I’m still giving it four stars as I did like it. Fox is one of my favourite authors so I went in with heightened expectations, something that isn’t really fair to her.

In the Eden Archer, Crimson Lake and Harriet Blue series’ we spend a lot of time with our lead characters and get to know them well. I also really liked her so-far-standalone joint venture with James Patterson, The Inn as – again – we were offered some really likeable characters I’d be keen to meet again.

My notes made during reading this novel are filled with names. Fox introduces many many names. Inmates, prison guards, prison guards’ family members, US Marshalls, lawyers and casino workers. I felt overwhelmed as I’m bad with names. I realised I didn’t have to remember everyone but for a long long time I wasn’t sure who exactly I needed to focus on or care about.

We’re introduced early on to the prison warden. She’s in a quandary because she’s given a very difficult decision to make. And Fox lets us understand how frustrated she is when she freezes rather than reacts as she’s trained to do. And then there’s prison guard Celine who’s got some serious baggage. Her antagonism towards Kradle makes no sense given some of the other death row inmates – serial killers and truly psychopathic peeps – on her watch.

I was happy when we met US Marshall Trinity Parker as it seemed she was going to be our lead and I liked that she was capable and a bit snarky. Until we realise she’s actually a complete bitch and treats poor Celine horribly.

We follow a few prisoners post-escape, Kradle of course (who’s determined to clear his name) and who unfortunately teams up with a violent killer – something he doesn’t do by choice. And then there’s Axe, an older man who’s been in prison for much of his life. Fox puts us into his head and he seems harmless, almost zen-like. With some emphasis on the seems.

We meet an escaped neo Nazi and then there’s con-man Walter Keeper (Keeps) who’s due to be released the day after the prison break so stays when everyone else escapes.

So… there’s a lot happening here and Fox paces this well. It doesn’t let up and I suspect that’s something most people really love about this book. And there’s something for everyone: serial killers and an array of criminals (and crimes) to suit everyone’s taste. As per the back cover blurb, Fox predominantly directs us in the direction of Kradle and his mission to clear his name.

Because I love a good mystery, I very much enjoyed this element and Kradle’s attempts to co-opt Celine into re-investigating his case piqued my interest. I also liked the way that plot-line played out. I liked Kradle but took a while to warm to Celine, until we understand the motivation behind some of the obsessiveness we see when we first meet her.

We dip back and forth to visit a few other escapees and and their exploits. It’s probably done on purpose but I was very intrigued by Axe, though Fox kinda underplays his post-escape actions. I wondered if perhaps she intends to pursue his story in future novels?

In addition to meeting so many characters (by name) in the first few chapters, I would also have ditched a couple of scenes (one involving a lawyer and another with a casino worker) to focus more on key plot elements rather than be distracted. Of course I realise others probably like that very element of this book.

Having said that this is currently on the best-sellers list with all of the big names – Harlan Coben, David Baldacci and James Patterson – and deservedly so. Fox is garnering a reputation for herself in this genre and I hope, like fellow Australian Michael Robotham, she has great success on the international stage.

The Chase by Candice Fox was published in Australia by Penguin Random House and is now available. Check out others participating in the blog tour over the next couple of weeks. Carol from Reading, Writing & Reisling tells me this is her favourite of Fox’s books to date. 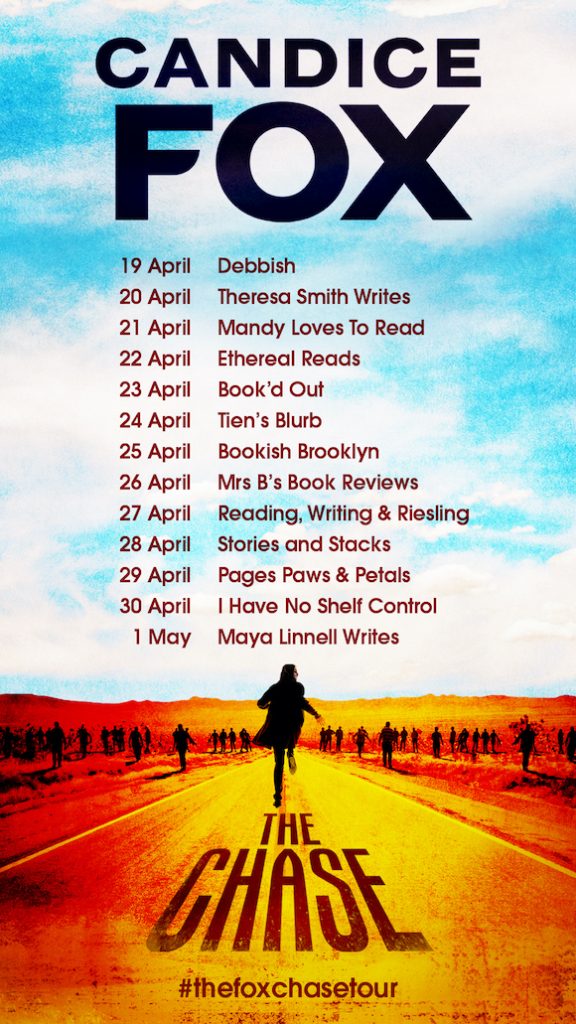