I’ve previously admitted to my antipathy towards Australian authors (#longstory) but am really glad I’m venturing out of my comfort zone to try more and more as I’m discovering some fabulous talent and delightful characters with whom to while away my evenings.

Rebecca James is actually about to release her third novel (Cooper Bartholomew is Dead) here in Australia, but I’ve only just read her second which I very much enjoyed. In fact, I read it in a sitting (well, one bath!).

In Sweet Damage  we meet Tim – who’s sleeping on his ex-girlfriend’s couch and (from Lilla’s point of view) frittering away his life surfing and working in his father’s restaurant. Despite her fairly prickly nature, Tim’s still in love with Lilla, although she’s long-since moved on.

When Lilla’s new boyfriend tires of Tim sleeping on the couch she forces him to apply for a room advertised for rent in a neighbouring suburb. It’s very affordable and Tim heads off expecting the worst. 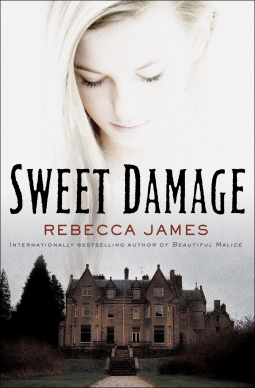 So he’s surprised to arrive at a palatial mansion called Fairview with astounding views of Sydney Harbour. The only catch, the owner of the house and only other resident… the mysterious Anna, is agoraphobic. Only 19 she’s been orphaned and suffered other tragedies which have left her prone to anxiety attacks. Tim finds himself intrigued by his new landlord and the pair slip into a relatively harmonious relationship.

However, after a number of unexplained incidents in the cavernous mansion, Tim starts to worry that Anna’s issues may be more than he can handle. Even more worrying is that he’s starting to find her increasingly attractive – despite still fantasising about reviving his relationship with (the increasingly unlikable) Lilla.

Also in the mix are Fiona and Marcus Harrow, Anna’s lawyers who acted as intermediaries when advertising the room and who have supported her since the death of her parents… but who are both kinda creepy and weird.

I devoured this book. I was initially worried I’d requested a novel about a haunted house, but it wasn’t that obvious or simplistic. In fact I was easily lured into the unfolding story. Anna and Tim as our lead characters were both really engaging and likeable. We were mostly in Tim’s head but occasionally got a glimpse inside Anna’s as she struggled to overcome her phobias and anxiety.

I really had no idea where the book was going and while part of the ending was predictable, other aspects certainly weren’t. The arc travelled by some of the characters was particularly interesting and added additional complexity to the plot.

Sweet Damage by Rebecca James will be published by Random House Group – Bantam Dell on 2 December 2014.