Belfa (Bell) Elkins is the Raythune County Prosecutor who returned to her hometown some years before. She seems to have settled back into life in Acker’s Gap but is grappling with: the arrival of her sister Shirley (recently released from prison after 30 years); her daughter who seemingly prefers to spend time in the city with Bell’s ex husband; and the silent treatment she’s receiving from her lover – who’s away receiving rehab for recent injuries.

Bell’s foul mood is exacerbated by the absence of her friend (and local sheriff) Nick Fogelsong and a fresh (and seemingly inexplicable) murder case.

Murders are a rarity in Acker’s Gap and fortunately the Sheriff returns in time to calm the town’s frayed nerves by the time a third body appears.

There seems no connection between the three deaths, but Bell’s not convinced and starts looking into the cases herself. 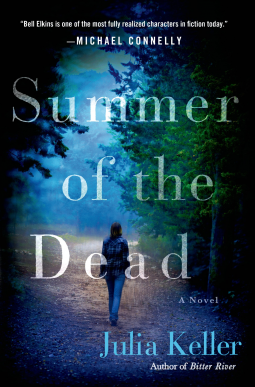 The novel also features 20yr old Lindy whose former coal-miner father lives in the basement she’s set up like an underground mine. Normally housebound, the forgetful, sometimes violent and increasingly erratic Odell has been out at night and Lindy worries about what he’s been up to.

And then there’s hometown hero and former West Virginian Governor Riley Jessup who reappears along with his daughter and sick grandson.

Summer of the Dead is the third instalment in this series by Julia Keller and I struggled a little – not knowing who all of the players were and what I was supposed to know (had I read the previous novels) as opposed to what would be unravelled in this novel.

My biggest issue with this book was the fact that none of the characters were particularly likeable. I noted some reviewers commented that the character of Bell is unfolding more and more as Keller’s series progresses. (So I may have appreciated them more had I read the first two in the series). Although I didn’t find her unsympathetic, she grated on my nerves and I was frustrated by her priggish and supercilious attitude towards her sister Shirley (who killed their father to prevent him from molesting Bell). In fact, I felt most engaged in scenes featuring Lindy – who was (for me) the most likeable out of the motley crew.

As a mystery novel, Summer of the Dead is a bit challenging as there’s a bit happening and we aren’t really privy to all of the facts. However, it did keep me guessing and – after I got through the struggle of working out who was who (and who I needed to care about) – I found the book to be well-paced and intriguing enough to keep me turning the pages.

Julia Keller’s Summer of the Dead, published by Minotaur Books (St Martin’s Press) will be available from 26 August 2014.