Author Bruce McCabe spoke at the national book bloggers’ forum I recently attended. Bruce is a rare specimen – having self-published his debut novel, Skinjob and been busy touting it to bookshops and the like when he was ‘discovered’ by a prominent UK Agent.

Bruce’s hard work and confidence in the story he had to tell paid off when he then signed a deal with Random House to (re)publish Skinjob.

It’s not the kind of book I’d usually read. The title meant nothing to me (and sounded a little salubrious*) and – although I was once a fan of fast-paced action involving treacherous corporations and governments in my John LeCarre, Len Deighton, Robert Ludlum and David Morrell phase – I kinda go for boring old serial killer type novels nowadays.

However, I surprised myself by whipping through 3/4 of Skinjob in a night and finishing it off the next day.

Bruce’s inspiration for the novel came from his own scientific background and his interest in how technology and humanity connect. He was invited to a demonstration at an insurance company during which he witnessed consultants using lie detection voice software (not sure of correct title) on calls with claimants. Bruce said he pondered on the ethical issues of such technology if used widely by law enforcement and its impact on our civil liberties. 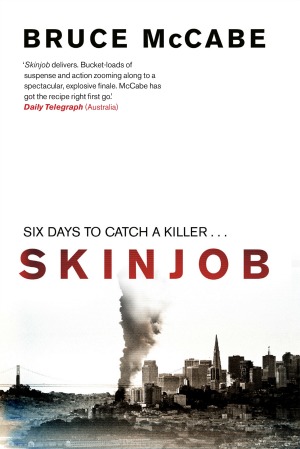 Skinjob takes this technology further and in a not-too-distant future, the FBI boasts a small number of officers trained in the use of handheld lie detectors.

Agent Daniel Madsen is one such agent, based in San Francisco when he’s called to assist the police to investigate the bombing of a Dollhouse.

Fans of the Josh Whedon show (like moi) will get the reference, but essentially in a future world, the dodgy sex dolls I’ve seen on SBS TV specials are taken to a new level and are capable of basic human functionality.

Most importantly they look and feel real.

Feminist and church groups are outraged as Dollhouses seemingly replace brothels and are legalised, so when the San Francisco Dollhouse is bombed killing 12 people (and destroying a number of skinjobs), the powerful and wealthy NeChristo (religious) organisation is a natural suspect.

Unfortunately the stakes involved are huge and the church and business leaders have influential friends with a lot to lose, and soon Daniel finds himself in the firing line.

Skinjob progresses at a good pace. I *may* have skimmed over some of the technical stuff (as usual) but it didn’t really matter. Even if techno-thrillers aren’t your thing, or if you have a problem with the adult industry you’ll find that – despite all of that, the case ultimately boils down to values and greed – pitting organisation against organisation.

I was far more absorbed than I expected to be and it reminded me of my 1990s spy and espionage fetish. McCabe spins a good story.

The book’s strength is the complexity of the ethical issues debated within: hand-held lie detectors – used productively to fight crime, but also by ‘integrity’ officers on law enforcement colleagues; and of course the adult entertainment industry. Daniel’s interview with the head of a feminist organisation allows the argument against sex dolls to be clearly articulated – the risk of continued escalation in the exploitation and debasement of women and increasing expectations in terms of men having their sexual needs met.

I’ve pondered on this a lot since as I’m pretty #meh about the whole sex industry and have no strong feelings either way. I wondered if perceptions would be different if male dolls were also available. (Hey, I’m an equal opportunity gal! 😉 )

If there was any weakness it would be the lack of depth to a couple of key characters, however the lack of insight into their lives didn’t impinge on the unfolding plot. I also found some of the detail about locations (streets, suburbs and the like) a little irrelevant – but then again, that’s me. I’m prone to skim on some occasions.

Skinjob is a great debut for Bruce McCabe – a well written and well paced plot within a complex and morally challenging environment.

Do the ethical issues surrounding readily-available lie detection tools worry you? What about sex dolls?

I’m linking up with Essentially Jess for IBOT today.

* Battlestar Galactica / Blade Runner fans will know that a Skinjob is a derogatory term for a replicant or android.