I’ve only read one Jane Green novel (Jemima J)  and it was a long time ago, however I know she’s a prolific and popular writer so jumped at the chance to read her upcoming release Saving Grace.

Grace Chapman is the beautiful, poised and talented wife of successful writer Ted. After her own unhappy childhood with a manic depressive mother who drank heavily and blamed her daughter for everything wrong in her life, Grace threw herself into her marriage and raising her now-grown daughter Clemmie.

Grace has come into her own during her time with Ted. A former book editor and sometimes-author, she now volunteers at a homeless persons’ shelter and fundraises for important community issues. Her life looks idyllic but it’s far from that. Ted’s increasingly moody and his temper tantrums have Grace walking on eggshells. She never knows from one moment to the next which Ted she’ll be confronted with: the angry disparaging man who belittles Grace and reminds her of her mother; or the loving, tender and apologetic man she married. 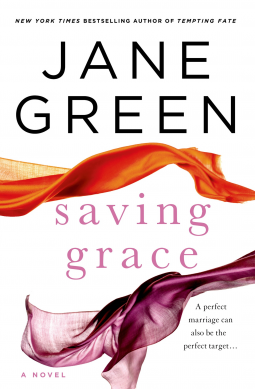 When we meet the Chapmans, the one person who could control Ted – his former assistant – has left after a long time in their employ, and (as a result) their life is in disarray.

It’s fortunate then that they meet Beth, a plain and eager-to-please woman in her mid 30s, who seems heaven sent. She not only quickly makes herself indispensable to Ted, but to Grace as well.

Her arrival is even more timely as Grace suddenly finds herself constantly tired and grappling with apathy and depression. Ted and Beth are concerned and make an appointment for Grace with a well-known psychiatrist who diagnoses Grace with bipolar disorder.

Fearing she’s following in her mother’s footsteps Grace’s confidence is shattered and she continues her downward spiral until she completely loses face in her old community.

Fortunately for Ted (and Clemmie), Beth is on hand to pick up where Grace left off. And that – my readers – is sarcasm…as Grace is soon supplanted in her own life.

I’ve actually recently read a similar book and quite enjoy the single-white-female premise, even when you know it’s coming.

Saving Grace  is written in third person but from Grace’s viewpoint. Although spectacularly lacking in self-awareness, Grace is very likeable – even in her confused state.

However… I have to admit I was somewhat underwhelmed by this novel. I was surprised that such a prolific writer’s work seemed a bit underdone. As this is her 16th book, perhaps Green is famous enough that she can break the ‘show don’t tell’ rule because it’s something she did. Consistently.

The writing itself wasn’t poor but a tad churlish in parts and I noticed the odd awkwardly-worded phrase or two, so felt it could have done with a good edit.

I also felt there were a lot of unanswered questions and a lack of closure in this book. Vengeance wasn’t necessary but I did keep checking for some extra pages, thinking I’d missed something.

On a positive note, it’s the perfect holiday read and fans of Green will probably love this book. As an added bonus – given Grace’s love of cooking (and Green’s own penchant for the art), Green’s included recipes in many of the chapters.

I received an advance copy of this book via the publisher and NetGalley for review purposes.

I’ve actually added a couple of additional comments in Goodreads which border on spoilers, for those interested.