I reviewed MJ Arlidge’s debut novel earlier this year and enjoyed the macabre thriller so was excited to see his next DI Helen Grace instalment available for review.

In Pop Goes the Weasel, Helen’s still reeling from the events of Eeny Meeny  – her sister’s appearance and the death of an esteemed colleague. On top of that she’s got a new boss – Detective Superintendent Ceri Harwood. 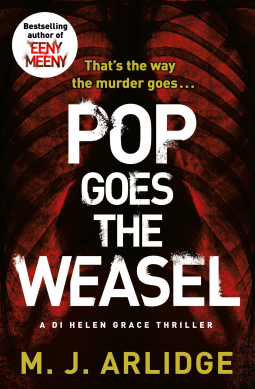 Helen’s team is presented with a new case in which a man (supposedly a senior member of his church and pious beyond reproach) has been killed in an area frequented by prostitutes and their clients. He’s been sliced open and his heart delivered to his family – who understood he was out being a good Christian and helping the less fortunate. (Which he kinda was. Really.)

On discovering the body of another man who’d last been seen with a prostitute, DI Grace and her team realise they’re most likely looking for a female prostitute who’s luring men to their deaths. (And cutting our their hearts.)

In the meantime DC Charlie Brooks has returned to work after the events of Eeny Meeny. Helen doesn’t want her there and makes this obvious, but at the same time DS Harwood seems astonishingly welcoming. In fact Charlie soon realises she’s being used against Helen, which – despite their tenuous relationship – makes her uncomfortable.

Helen’s again harassed by the no-holds-barred journalist Emilia Garanita and again seeks solace with Jake – who knows her in a way others don’t and ‘feeds’ her secret.

When the case goes pear-shaped and more men die Harwood blames Helen and sees it as an opportunity to take her down, removing her not only from the case, but also from the police force.

Pop Goes the Weasel  is another impressive instalment from Arlidge. We’re offered an interesting plot with a heap of twists and turns and a cast of interesting characters. Emilia Garanita felt a little over the top this time and I found myself a bit frustrated by Harwood – Helen’s new boss. Why is it I wonder that so many police procedurals feature glory-seeking and quarrelsome bosses?!

However, the characters of Helen and Charlie really sold this (again) for me. Helen in particular is the perfect protagonist. Strong but flawed.

It’s only the second book in this series but I’m relieved that number two delivers on the promise shown in number one and it’s looking like this could be a great new series which could stand the test of time.

Pop Goes the Weasel by MJ Arlidge will be released in early January by Penguin Books Australia.