I haven’t read any of Chelsea Cain’s previous novels and am relieved I started with the first in her new series… cos anyone who knows me knows I hate to miss out on the good stuff.

One Kick introduces us to Kick Lannigan – who we first meet as ten-year old Beth living a seemingly happy life with parents Mel and Linda… that is until the FBI breaks down their door to arrest the couple as part of a child pornography ring. It’s only then we learn that Beth is not Beth, but Kathleen (Kit) Lannigan who was disappeared five years earlier and has – sadly – starred in many of the movies peddled by her faux-parents.

It’s obviously a distasteful topic and if you think you can’t handle a book about child pornography… never fear, Cain handles the subject well and we really don’t learn much about what Kick went through (although more may unfold in future novels).

Ten years have passed and now (mostly estranged from her family) Kick is determined she will never again be weak or vulnerable. She’s dedicated her life to learning martial arts and become an expert with a range of weapons. She doesn’t seem to work but supports herself and brother James with compensation money she received after her ordeal.

Despite a myriad of therapy Kick obviously still has ‘issues’ and her estranged family (and James in particular) worry about the obsession she has with children who continue to go missing. There’s a reason however and she believes it’s her penance. After all, she blindly prevented the police from uncovering more about her faux family’s pedophile ring.

Just after the latest amber alert, the mysterious – and rather impressive – John Bishop drops in on Kick unannounced. He’s tracking two missing children – including the latest child abducted. Bishop works for a wealthy patron and he’s got resources the police don’t have, and he knows far more than he’s letting on. 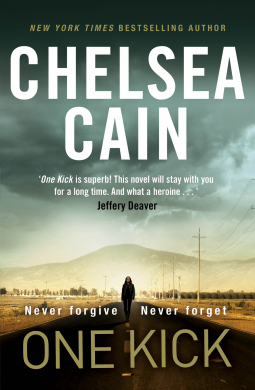 Although their partnership is rocky Kick and Bishop have a common goal and when the kidnappings connect to Kick’s own past and threaten her new life, she knows she must become involved.

Finding the missing children alive takes Kick out of her tightly-managed comfort zone. Years of therapy have gotten Kick to a point where she has mechanisms to cope with her worry and stress, but now they’re being challenged and her very controlled world is changing.

Although it’s been years since she saw her captor father Mel, he’s now dying and only Kick may be able to get information from him about his colleagues and who is responsible for the latest spate of abductions and related murders.

When I pondered over this novel later I realised there are a few unanswered questions or plot holes which obsessed me a little, but on the whole, it’s an excellent thriller. Indeed, I read it in a night and could not put it down.

Prickly Kick is a great lead character and I can only assume more of her past will be revealed over coming books in this series. Of particular interest is her relationship with her faux-father and kidnapper Mel. His feelings for Beth/Kick, and hers for him – despite everything – are a bit of mind f*ck (albeit a vaguely understandable one)!

One Kick by Chelsea Cain will be published by Simon & Schuster (Australia) on 1 September 2014.

I received an advance copy of this novel via NetGalley from the publisher.