Max’s interest is more than professional as an incident in her past has meant she’s dedicated her life to investigating cold cases or those of little interest to the police. Just before graduating high school, Maxi’s friend Lindy was strangled and her close friend – Kevin – accused of the murder. Max, believing in Kevin’s innocence alienated her friends and family by standing by him throughout his arrest and subsequent trial. Although he escaped conviction because of a hung jury, on later discovering he’d lied to her about his alibi, Max washed her hands of him and refused further contact. 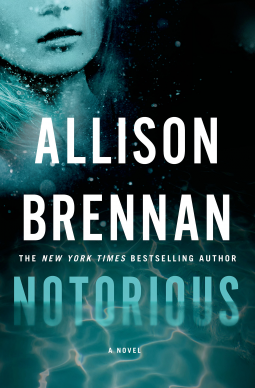 A dozen or so years later, Kevin dies – seemingly by his own hand – and his sister contacts Max begging her to return to her hometown and investigate his death.

Unable to refuse the young woman, Max discovers that Kevin had dedicated his troubled life to proving his innocence and uncovering who really killed Lindy; and Max soon realises (despite their tattered friendship) Kevin believed he could rely on her to finish what he couldn’t, and unearth a killer.

While back in her hometown Max also finds herself sympathizing with the grandparents of a young man killed near her old school and sets about discovering what led to his murder; wondering if the two events – over a decade apart – could possibly be related.

When I had a look at Allison Brennan’s site I realised I’ve read at least one or two of her Lucy Kincaid series. But I loved that her new creation Max (and her offsider David) came to us fully-formed. Indeed, this could be the middle novel in a series… Max seemed so real and ‘comfortable’ and any backstory was expertly divulged without we readers feeling like we were drowning in detail or missing some vital information.

This is the kind of novel I love to read. It’s reminiscent of many series I follow by authors such as Alafair Burke, Jan Burke, JD Robb and Laura Lippman. The plot keeps a good pace and offers a nice mix of ‘real’ characters, suspense and drama and a bit of romance. And… it leaves us wanting more. So we will most definitely tune in for Max’s next adventure.

Notorious by Allison Brennan will be available from 18 March 2014 and published by (St Martin’s Press) Minotaur Books.

PS. I notice that a digital novella will be available from early February, which I must get my hands on! A prequel of sorts I wonder?!

I received an advance copy of this book from the Publisher via NetGalley for review purposes.

Do you love a good ‘series’?