Linwood Barclay’s latest release is a sequel to his 2008 novel No Time For Goodbye. Fortunately it doesn’t matter if you haven’t read the predecessor, or – if you’re like me – and have read it but are a little murky on the specifics.

We pick up with the Archer family – Terry, Cynthia and Grace – seven years after their first outing. Cynthia is still dealing with her demons – a result of having been abandoned as a child and almost losing her life (and the lives of those she loves) later. Overly protective of 14-year-old Grace she’s forced herself to take a time-out from her husband and daughter after an incident where she (accidentally) injured Grace. 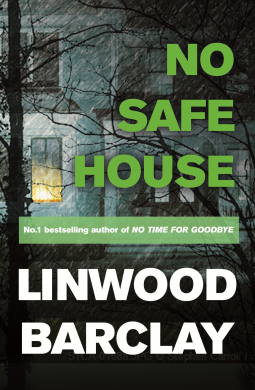 Naturally (following in her mother’s footsteps) Grace has been rebelling against her mother’s overly strict behaviour but realises she’s in over her head when she’s out with Stuart who decides to break a house (he happens to know is empty via some ‘list’ of his father’s) to joy ride in the owner’s Porsche. The young pair discovers they’re not alone in the house and in the ensuing dark mayhem Grace fears she’s accidentally shot Stuart.

In a bizarre coincidence Stuart is the nephew of mobster Vince Fleming – a childhood friend of Cynthia. When Vince orders them to keep quiet Terry, Cynthia and Grace know something is amiss; but Grace, unable to deal with her guilty conscience can’t walk away and the whole family becomes embroiled in Vince’s dangerous world.

Trying to play peacemaker and interlocutor between the Archers and Vince is his stepdaughter Jane, a former student of Terry’s who made it to college and broken free from Vince’s orbit (and who also featured in No Time For Goodbye).

I’ve read most of Linwood Barclay’s novels and No Safe House is another solid and enjoyable read. I was a tad confused re who was who in the beginning and the introduction of the police made me assume they’d play a bigger role, but I appreciated the additional twist at the end; I kinda knew something was coming but had no idea what. The sins of the father (mother etc)…

No Safe House by Linwood Barclay is available from 25 September via Orion Publishing Group (and 12 August via Hachette Australia).

I received an advance copy from the publisher for review purposes.