Here in Australia, the issue of refugees is a biggie. Well… particularly in the minds of our politicians, mainstream media and those who listen to talkback radio. Unfortunately much of what people believe about refugees and asylum seekers is based on scaremongering and misinformation*.

In reality, our intake of refugees pales in comparison to many countries. We rank 69th on the list of refugees per capita (taking 1 per 1000 people). Wow, no wonder we have to worry about all of those asylum seekers and refugees clogging up our hospital waiting lists and causing traffic problems. (Yes that was sarcasm Sheldon. #obscureBBTreference)


Shortly after 9.30 in the morning, a young man walks into Surf City, Bondi's newest shopping complex.

He's wearing a dark grey hoodie and a bomb around his neck. Just a few minutes later he is locked in a shop on the upper floor. And trapped with him are four innocent bystanders.

For police chaplain Paul Doherty, called to the scene by Senior Sergeant Boehm, it's a story that will end as tragically as it began. For this is clearly no ordinary siege. The boy, known as Ali Khan, seems as frightened as his hostages and has yet to utter a single word.

The seconds tick by for the five in the shop: Mitchell, the talented schoolboy; Mouse, the shop assistant; Kimmi, the nail-bar technician; and Roger Callaghan, the real estate agent whose reason for being in Bondi that day is far from innocent.

And of course there's Ali Khan. Is he the embodiment of evil, as the villagers in his Tanzanian birthplace believe? Or just an innocent boy, betrayed at every turn, who just wants a place to call home?

We rarely think of the human face of those yearning for a better life or arriving on our shores. And I’m as guilty as anyone else in that regard. 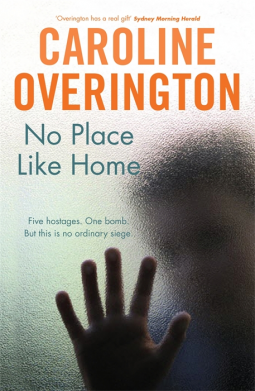 In Caroline Overington’s latest novel, No Place Like Home, the plight of refugees (here in Australia and elsewhere in the world) is not the story itself, but part of an important narrative which underlies everything that follows.

Events unfold through the eyes of Police Chaplain Paul Doherty who’s called to the scene of a Sydney shopping centre where a young male wearing an explosive device is holding four people hostage.

We learn more about former-Priest Paul as narrator of the unfolding events. Likeable and moderate in this thinking, Paul unpicks the story of how each of the hostages came to be trapped in the lingerie shop and – eventually – we learn more about the hostage taker himself.

No Place Like Home is Caroline Overington’s fifth novel, although she also has two non-fiction books to her name. Her journalism background serves her well, as all of her characters are very believable, as are the details included in the characters’ backstories. Indeed, this could just as easily be non-fiction (and I actually kept wondering if it was based on fact, or even partially so!).

Although the novel hinges on the events taking place in a shopping centre lingerie store, it’s about so much more than that.

The novel touches on a heap of issues oft-discussed in today’s society – from the impact of social media and misinformation, to the roles and responsibilities of religion and religious figures, to fidelity and materialism and – of course – immigration policy and practices.

At times I felt a little too much backstory or detail was offered on characters, but possibly because I was yet to realise their role was more pivotal than I initially realised.

The story that unfolds is – ultimately – devastatingly sad. I like to think that we – as a society – have learnt from the past, but unfortunately I’m not so sure…

No Place Like Home was published in Australia by Random House on 1 October 2013.

* Refugee Council of Australia’s Myths about refugees and asylum seekers.

I received a copy of No Place Like Home for review via Random House via NetGalley.

Does No Place Like Home appeal to you?
Have you read any of Caroline Overington’s other books?