I’ve read Harlan Coben novels before, but not all of them… and now I’m wondering why. I’m usually more organized and efficient than that… however, that oversight going to change because his latest novel, Missing You has reminded me that I need to sort my bloody reading habits out! 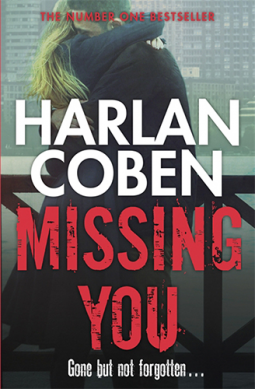 In Coben’s stand-alone new thriller Detective Kat Donovan’s bestie has just registered her on an online match-making site. Although reticent Kat finds herself trawling through online profiles and is agog when she comes across her former fiancé.

Kat remembers Jeff as seemingly perfect but – in the aftermath of her father’s murder 18 years ago – she pushed him away and hasn’t seen him since.

And suddenly… here he is. Online and available – a widower and single father. Before she can help herself she sends a message to Jeff – in the form of a song – which had personal significance during their relationship. His response however, disappoints her and Kat’s hurt that he’s so bizarrely off-hand with her.

At the same time Kat’s approached by a young boy, concerned that his mother has disappeared after a weekend away with a new love. Local police haven’t believed 15yr old Brandon’s story because he has a history of acting out; but when it turns out that the man his mother met online was ‘her’ Jeff… Kat starts to get suspicious.

Before she knows it she finds a series of missing women and Kat struggles to believe the man she once knew and loved could be involved.

On top of all of that the man imprisoned for her father’s murder is about to die, leaving Kat with a lot of unanswered questions.

Coben’s Kat Donovan is very likeable… in fact, I’d love to follow her through future thrillers.

Missing You is most definitely a page-turner; and the crime(s) at the centre of the novel, a bit different to your usual psycho raping and killing because of mother-issues.

Missing You by Harlan Coben is available via Orion Publishing UK, Penguin US and  Hachette Australia from 18 March 2014.

I received an advance copy of this book from Hachette Australia for review purposes.