I really like Sandra Brown. She’s one of several authors I read whose novels feature a good mix of crime / suspense and romance. And her latest novel, Mean Streak  is no different.

Dr Emory Charbonneau could live as a trust fund baby following the death of her wealthy parents, instead the paediatrician has dedicated her life to helping others. The avid marathon runner is training for a fundraiser she has organised when she decides to take a trip to snowy mountainous terrain in North Carolina for a practice run.

Just before leaving she and husband Jeff have a fight. It’s yet another over her dedication to running. He believes it’s become an obsession and leaves little time in her life for other things. 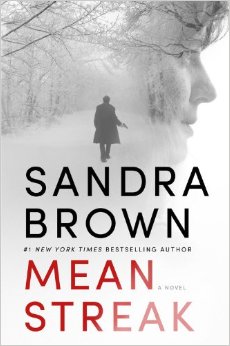 Early in the morning, after arriving at the isolated trail Emory sets off on her training run. And disappears.

Jeff is the obvious suspect. His behaviour after Emory’s disappearance is suspicious. And then there’s the affair he’s having.

Days later Emory emerges from the snowy mountain with a tale of being rescued by a stranger who treated her wounds and helped her return to civilisation. She’s cagey though and the police wonder if Jeff’s the only one with secrets.

When Emory’s evasiveness becomes obvious however, she has no choice but to share the full story of her disappearance.

There were a few twists and turns in Mean Streak  – which of course is a good thing.

You think it’s obvious. Then it’s not. Then you again think you’ve worked it out. Only to be wrong. Again.

There were a few cliches and the romance side of things was a tad predictable – but they were easily forgiven in this enjoyable read.