My paternal grandmother died before I was born and while my father – who struggled a little with his emotions – talked about her, he never spoke of her death. As a result, when I was a child, the concept of death was scary and confusing. Whenever my parents told me stop doing something, I wondered if it was something my nanna had done – which was why she died.

At night, for example, my father would tuck my arms in underneath the sheets – although I much preferred my arms on the outside. Did nanna sleep with her arms outside the covers, I wondered? Is that why she died?

I don’t fall in love with many books. It’s happened maybe 3 or 4 times in the last few years. Emma Donoghue’s Room and The Missing One by Lucy Atkins come to mind. But I’ve another to add to my list.

I’d heard some hype around Brooke Davis’ Lost & Found and – now that I’m a convert – I can reassure you it’s bloody well deserved.

Seven year old Millie Bird is obsessed with death. Even before she lost her own father who is number 28 in her Book of Dead Things.

Our glimpse into Millie’s world kicks off on The First Day Of Waiting when her mother takes her to a department store and tells her to wait. Which she does. Secreted beneath the Ginormous Women’s Undies stand Millie waits and waits.

On the Second Day of Waiting she befriends 87 year old Karl who – like Millie – is hiding out in the store. Unlike Millie who’s waiting for her mother’s gold shoes to return to fetch her however, Karl’s on the run… from the retirement home where he continues to pine for his dead wife. 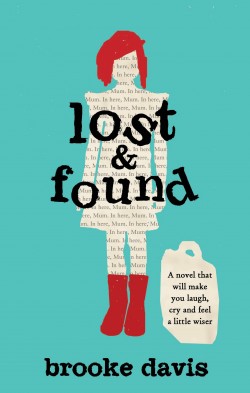 Store security discover the unlikely pair and fearing Millie will be surrendered to Child Services, Karl tells her to run. When she reaches her house she lets herself in – only to find that her mother’s belongings are gone.

Across the street, Agatha hasn’t left her house for seven years since the death of her husband. Angry at her ageing body, the belligerent Agatha passes the days watching her neighbours and shouting insults. When Millie asks Agatha for help the 82 year old’s first reaction is to say no. Which she does.

But eventually won over by the pragmatic and solemn Millie, Agatha decides to help her find her mother who (they discover) has disappeared to Melbourne. And what comes next is a bizarre road trip of sorts. By chance they encounter Karl and the mismatched trio set out via bus and train from Perth to Melbourne in search of the woman who left Millie in a department store.

I loved the informality of the chapter headings and conversational style of prose. Davis does an amazing job with her three characters, but she really nails Millie (and her ‘voice’). The seven-year old’s obsession with death, her inquiring mind and brutal honesty is enchanting.

At times I snorted with laughter – like when Millie got on the train’s loud speaker and calmly announced (the same thing she told everyone):

And I later sobbed:

“And Millie wants to curl up in her arms and stay there and never leave, but she doesn’t do that at all because the lady isn’t her mum and you can’t really do that to mums who aren’t yours. But you should be able to hug all the mums who aren’t yours, because some people don’t have mums and what are they supposed to do with all of the hugs they have?”

Lost & Found is reminiscent of Room by Emma Donoghue – who also writes beautifully from a child’s point of view. In fact, the labelling of ‘things’ and the overly-explanatory-yet-simplistic prose is similar to that in Room… and quite addictive.

I loved this so much I need BUY a hardcopy cos I must own it to read again and again.

Lost & Found was released via Hachette Australia on 24 June 2014 and is available in all of the usual places.

I received an online copy for review purposes.