Kylie Kaden’s Losing Kate was a bit of a departure for me because: 1. I mostly read crime fiction / thrillers; and 2. it was written by an Australian author.

I thought I’d talked here previously about my ridiculous antipathy toward Australian novels but I can’t find the reference. (Calls for a separate blog post I think… as my reasons are about escapism and familiarity rather than quality etc.) 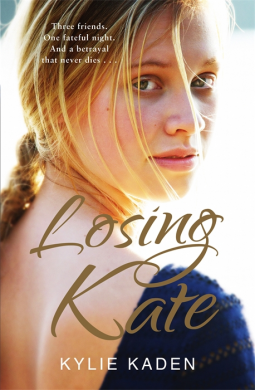 But as I was at a loose end on the weekend I decided to take on Queensland author Kylie Kaden’s debut novel, Losing Kate. And I was certainly glad I did.

Frankie and Jack were inseparable as children. In fact, it didn’t matter that Frankie was actually Francesca… at least until puberty intervened.

Any new feelings or changes to their relationship were halted however, by the arrival of Kate.

Both Frankie and Jack are drawn to the beautiful and rebellious Kate – though Frankie struggles not to feel jealous of the burgeoning relationship between her new best friend and lifelong best friend. Unsurprisingly things come to a head during a weekend away following their high school graduation and Kate disappears.

The young friends initially come under the close scrutiny of the local police and eventually Jack’s family move away to avoid speculation and community unease.

Inexplicably – 13 years later – Jack, his partner Sara and their toddler move into the house behind the still-single Frankie. Jack’s not told Sara about Kate and the impact her disappearance had on his life, so he and Frankie are forced to act like mere acquaintances.

However, the easy intimacy is still there and their relationship starts to take off where it abruptly ended over a decade before.

This (of course) is exacerbated by Jack’s disintegrating relationship with Sara and his belief that Frankie cannot let go of the past and feels guilty for the role she (and Jack) played in Kate’s disappearance.

A novel set in Brisbane would normally have me running screaming (for the reasons I touch on above!), but I appreciated the familiar setting (perhaps because I no longer live there!).

Frankie and Jack are both well-developed characters, and/but because of that – often unlikable and somewhat selfish.

What-became-of-Kate is fairly obvious partway through the novel, but there are a few twists and turns relating to her disappearance which Frankie needs to navigate before she can move on with her own life. All in all, a good first novel by Kylie Kaden.

Losing Kate was released in Australia on 1 April 2014 via Random House.

* I received an advance copy of this book for review purposes.