DCI Helen Grace from Southampton Central’s Major Incident Team is back in the fourth book by MJ Arlidge. I missed the third in this series which thankfully doesn’t seem to have been a problem. There’s been another change in leadership since book 2… and it occurs to me that the ‘brass’ never seem to last long in police procedurals. I’m not sure it’s quite the case in real life however.

The book kicks of with a series of fires. Three in one night. All deliberately lit, one after the other. The first two are at empty businesses, but divert fire and rescue teams from the third fire—a house in suburban Southampton.

A teenage boy survives by throwing himself out of a third storey window but his mother and sister are badly burnt and may not survive. Helen’s team soon discover the devastated father, who was out at the time, had some debts and he and his creditors come under suspicion.

However when three fires are set on subsequent nights, Helen and her team struggle to find something all targets may have in common. 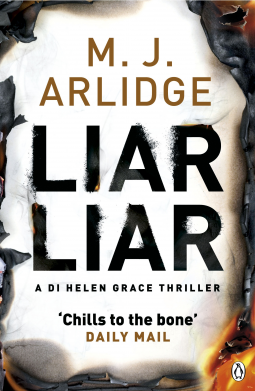 I have to admit I couldn’t really remember other members of Helen’s team other than Charlie and she’s back and seeing things differently now she’s a mother. She’s sympathising more with victims and struggling with her own emotions.

As for Helen, her usual method of stress relief isn’t available to her so she’s forced to look elsewhere rather than bottle things up. I love being in Helen’s head. She’s tough and a little prickly but introspective and really quite self-aware.

And then there’s her new boss, DS Jonathan Gardam who seems far too hands-on and solicitous for her liking. He supports her 100 percent, so Helen’s suspicious—surely he’s got some agenda?

By also sharing the stories of some of the victims and their families Arlidge engages us in their plights and we’re ultimately as invested as they (and Helen) are in getting justice.

Arlidge offers a stack of false leads and twists and turns in this latest offering and I had absolutely no clue ‘whodunnit’.

Oh and… #spoileralert (kinda). There’s a little hook at the end to whet our anticipation for no. 5 in the series.

Liar Liar by MJ Arlidge was published by Penguin UK (Michael Joseph) and available from 10 September 2015.

I received an electronic copy via NetGalley for review purposes.

Check out my reviews of books’ 1 & 2 in this series: Eeny Meeny and Pop Goes the Weasel.