I’ve just reviewed another novel (which will be published in a week or so) which I struggled to read and review as it was really about… nothing in particular.

Unlike Seinfeld – the show about nothing – that novel (There Must Be Some Mistake) had no real story arc. It was a bit like a snippet or vignette of someone’s life. Indian Summer by Marcia Willett could have been similar. But it was oh so different.

Sir Mungo Kerslake is a retired (and renowned) thespian. He divides his time between his place in London and a converted ‘smithy’ on his childhood home estate. His father – horrified at his son’s choice of career – cut him out of his will many years before, but his more dour and traditionally-employed brother Archie, spurred on by wife Camilla, offered Mungo part of the family property, Home Farm. 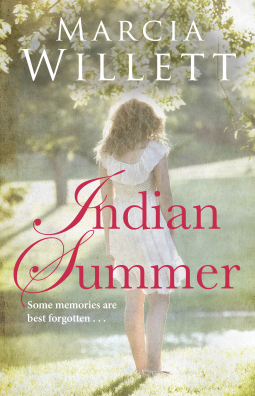 When Mungo returns to Home Farm he’s reminded of his younger years and great romance with famed actress, Isobel Trent. Of course, it was a sham, for Mungo is gay and Izzy was having an affair with the less-likeable Ralph who dumped her to pursue fame and fortune overseas.

The novel opens with Mungo excited about a visit from Kit, a young friend from his theatre days. Kit’s a regular visitor to Home Farm and also knew Izzy well.

Mungo suspects Kit’s got something on her mind and looks forward to helping her resolve whatever’s plaguing her.

As well as old-timers Billy and Phillip who’ve long-lived on Home Farm, Camilla and Archie have rented out two cottages. There’s James – a wannabe writer, who’s taking in the local sights for inspiration for his latest novel; and Emma with her two children toddler Joe and baby Dora.

Emma’s husband’s in the military overseas. She misses him and is struggling with feelings for one of his former colleagues – who’s on leave and hanging around, eager (perhaps too eager?!) to win Emma’s heart.

In essence – that’s about it. Each of the characters has a little story of their own: a few revelations from the past; their dreams for the future. There’s no major conflict and plot twists, but… it’s just lovely. Well written with delightful characters.

For some reason in the very early part of the book some of the dialogue felt very theatrical and reminded me of characters performing in a play. I’m not sure whether this changed or I just became accustomed to it; and it wasn’t something I liked or disliked. Just something I noticed.

Of particular interest to me was the concept of ‘middle aged’ romance. It’s not something I read or see often. I have a blog post (wallowing in my drafts folder) about ageing actresses and their opportunities on-screen.

All of the great love stories involve youngsters or even (at a stretch) people in their thirties. I don’t tend of think of ‘true love’ as something experienced by older people – which is something that worries me… on the off-chance I will ever fall in love myself!

Indian Summer  was a surprising read. I think I requested it as I suspected it was a thriller about uncovering a crime committed years before. It’s SO not that. It’s not a thrilling page-turner, but a book full of beguiling characters willing you to read more.

Indian Summer by Marcia Willett and published by Random House UK (and Random House Australia) will be available from 25 September 2014.

* I received a copy of this book from the publisher for review purposes.