I am exceedingly late to the Gayle Forman party. In fact I haven’t yet read or seen the now-famous If I Stay

. I rarely read Young Adult (YA) novels but had read so great many reviews of Forman’s latest novel, I Was Here, I was keen to see what the fuss was about.

We’re in the head of 18 year old Cody. She and her bestie Meg have been inseparable since they were children. With the seemingly-disinterested Tricia as a mother, Cody was pretty much raised by Meg’s parents and remains close to them and Meg’s younger brother Scottie.

So Cody’s reaction to her best friend’s suicide is understandable. They’ve been living apart for the first time in their lives. Meg got a scholarship to University and Cody’s biding her time raising funds to eventually join Meg. In the meantime though she’s been struggling with a sense of resentment over the fact that she’s had to remain in their small home town while Meg’s off having new experiences and making new friends. 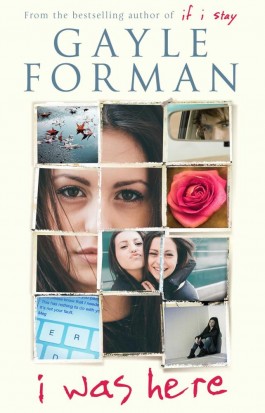 Cody sees Meg as the mainstay of their relationship while she’s the side-kick, so she feels she has nothing to ground her after the loss of her ‘better’ half.

What basically comes next is Cody’s attempt to understand how and why Meg would end her life. Understandably she (and others) feel they need someone to blame—other than themselves of course. Cody struggles with her guilt as she picks apart the last few months of Meg’s life and cannot help but wonder if Meg would have confided in her had she been less rancourous. Could she have prevented what was to come?

I was reticent to read this novel as I expected it to be traumatic. I’m not great with really really sad things. I like to think of myself as resilient, but in all honesty I’m fragile and struggle with heartbreak. Particularly that experienced by others.

However, I was relieved that I Was Here was nowhere near as devastating as I expected it to be. Cody’s reaction to her friend’s death is very understandable. She absorbs herself in her project, determined to find someone (else) to blame. We watch on, conscious of the fruitlessness of what she’s doing, while—at the same time—relating to her need to make sense of what’s happened.

I found myself both in awe of Cody’s determination and strength, and wanting to wrap my arms around her to offer comfort.

There are a lot of lessons in this book as it touches on so many issues. It’s about friendship and love, families and trust, and it’s about secrets and what we are and aren’t willing to reveal to those who know us best.

I Was Here by Gayle Forman was published by Simon & Schuster in Australia and currently available from all of the usual places.

Buy now from Booktopia (Australia), or…