Every man and their dog has already reviewed Hello From The Gillespies, so I feel a bit redundant adding my two cents worth weeks after the book’s been published.

However, it’s the first Monica McInerney novel I’ve read and other reviews tempted me to request the book via NetGalley so I figured this might help someone else decide whether they want to read it.

It’s not the sort of book I usually read and I quipped in a recent post that it’s a nice change from novels about psychopaths and serial killers. ☺ 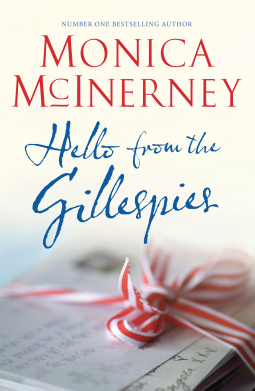 English backpacker Angela Richardson met cattle-ranch / property heir Nick Gillespie while working in a bar.  Just like Australia’s Princess Mary and Prince Frederick of… Denmark or wherever. But different.

Fast forward 34 years and Angela and Nick have raised four children – three girls (including twins) and a boy – a dozen years younger than any of his siblings.

To any outsider looking in, the Gillespies are a happy family. But things aren’t always as they seem. The family isn’t disintegrating but when Angela drafts her annual newsletter she takes the opportunity to vent.

She’s brutally honest about the state of her family. Naturally she doesn’t plan to send her rant – it’s purely cathartic. She already knows she’ll stick to her usual bland ‘everything’s perfect’ whitewash of the past year’s events.

When the newsletter’s sent by accident however, Angela realises she’s aired the family’s dirty laundry in a very public way.

Rather than be horrified most locals and friends around the world find Angela’s honesty refreshing. In a ‘Thank God’s it’s not just us’  kind of way.

Her family’s reaction – however – is an entirely different thing. Once they’re over the shock, Angela’s four children realise their mother’s words are true and it’s a wake-up call at a time the three eldest are at a crossroads. Nick, however struggles to come to terms with his wife’s ramblings.

He knows he needs to share more of his stress about their financial burdens. He knows he needs to confide in her more, but he feels like a failure. He buries himself in a project and is devastated to discover (along with 100+ other newsletter recipients) Angela sometimes fantasises about an alternate reality; one in which she marries her ex-boyfriend – a successful architect, and has one perfect child.

Nick’s still grappling with Angela’s words when an incident forces the entire family to come to terms with the role she plays in their lives.

I have to admit… I expected the ‘incident’ to be a tad more dire than it is. (Not that it isn’t tragic.) I also think it would have been better for the incident to have occurred before they’d discovered the newsletter. Being faced with their own failings and criticism and unable to face their accuser would have been a tad more powerful. But that’s just me!

However, I really enjoyed the novel and read it in a sitting (despite the 500+ pages). I once had a fetish for Maeve Binchy (back in the day) and it reminded me a little of her nurturing narratives. There’s something warm and comforting in the storyline and in the characters themselves.

Disclaimer – I may have also shed a tear or ten from time to time.

Hello From The Gillespies  by Monica McInerney was published by Penguin Books (in Oz) on 24 September 2014.

I received a copy of this book for review purposes from the publishers via NetGalley.