Bernard Minier’s The Frozen Dead was first published in 2011. I’ve had some bad experiences recently with poor translations, but fortunately The Frozen Dead – having won a number of literary prizes in France – does not suffer from any such problem. It is however, rather long and quite heaving-going in terms of reading fodder.

Commandant Martin Servaz is a Toulouse city police officer called to the French Pyrenees on a case; not just any case, but a particularly macabre murder. While it’s surely the sign of a disturbed mind, the victim in question is a horse and Servaz questions the need to waste his time on such an investigation.

The horse however belongs to a mega successful and influential businessman, so Servaz is forced to follow orders and give the case his attention. It isn’t long before another murder takes place, and it’s obvious the same killer was involved.

Complicating the investigation is the fact that there’s an asylum for the criminally insane close to the murder scenes and the DNA of an incarcerated inmate (who hasn’t left the asylum) appears at the scenes. 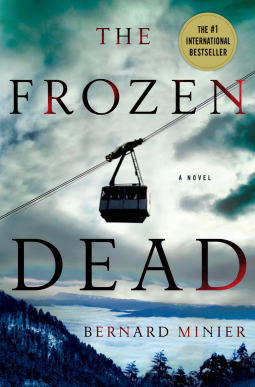 Servaz’s investigation partners him with local Captain Irene Ziegler and a range of other law enforcement officers and legal officials. The book includes reference to the fact that the French justice system differs from other countries: an examining magistrate leads the case, supported by a team of police officers and gendarmerie.

Despite the clarification I was a tad confused about who was in charge or had the most influence. Although distracting, it didn’t impact on the story at all.

There’s a lot happening in this novel – a spate of old suicides, dodgy practices at the asylum and corrupt/criminal powerbrokers – but they’re all linked in a way that isn’t contrived and (mostly) makes complete sense.

The book would have been a bit more enjoyable if a few hundred pages had been shaved off. It wasn’t overly wordy, but it was dense. Culling a bit of detail around the asylum (although interesting, methods of treatment and some of the players were somewhat superfluous to the plot); or the murder of a homeless man (Servaz’s previous case) would not have taken anything from the main storyline.

My only real gripe relates to the ending. Though the crimes were essentially solved, I wasn’t entirely sure what eventuated. Although that could have just been me?!

It’s a novel that’s intriguing rather than thrilling but I was invested enough in the plot and case at hand, that I needed / wanted to know what happened and how the bits of the puzzle fit together.

The Frozen Dead is available from 12 August 2014 via St Martin’s Press (Minotaur Books).