It wasn’t until after I’d read MJ Arlidge’s Eeny Meeny that I discovered he’d worked in television for 15 years. I wasn’t surprised however, because there’s something macabre, but visually appealing and alluringly theatrical about his debut novel.

In fact, I read another review of this book in which the reviewer – a fan of Criminal Minds – likened it to the TV show. And I completely agree. Indeed, I also have vague memories of an episode of Law and Order SVU which touched on a similar theme.

A woman comes forward – claiming to have been held captive for weeks prior to being forced to kill her boyfriend. 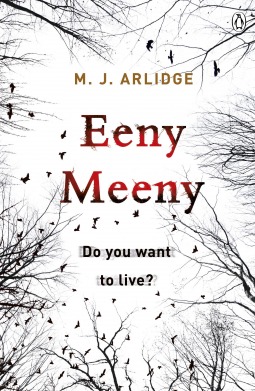 Her story sounds incredible: she and her boyfriend were hitchhiking before being picked up by a (seemingly innocuous) middle-aged woman in a van. The next thing she knew they were trapped with only an unusable telephone – used to deliver the ultimatum – and a gun. Whoever killed the other, they were told, would walk free.

DCI Helen Grace finds herself believing the woman’s tale, and when the scenario is repeated again and again, the police know they have a serial killer on their hands.

DCI Grace is well-respected, but a bit of an enigma to her Southampton Central Police Station colleagues. We readers learn that she has her own (very secret) way of dealing with the horrors of her work and the tragedy of her own childhood.

And, unfortunately Helen realises almost too late that she – in fact – may be the common thread between the pairs chosen by the manipulative killer.

As I said, this kind of plot isn’t completely new (ie. you choose which of you dies) but it adds an additional layer of intrigue: A killer using another’s hand to do their bidding. And… seemingly (well, eventually) of their own free will.

I’m not usually a visual person. I suspect if you are, you may be a little horrified by the gruesomeness of the crimes. I however, found that it actually made the scenarios real and gave us some insight into the desperation experienced by the captives.

I for one would steadfastly say I would never turn the gun on a loved one or colleague. But… as we starve to death I can’t help but wonder… at what point does our survival instinct kick in? And what if we believe it would alleviate their suffering? Our minds are (indeed) complicated machines.

DCI Helen Grace is extremely relatable and likeable. Her support cast could be caricatures of police officers and their all-too-common demons, but thankfully appear far too human for that to be the case.

I understand that this will be the first in a series of novels about DCI Grace and I for one look forward to the next instalment.

Eeny Meeny by MJ Arlidge published by Penguin Australia & Penguin UK will be available from 23 April 2014 in Oz.

I received an advance copy of this novel from the publisher for review purposes.