I was thrilled to see another Elizabeth George novel released so soon after her last Lynley / Havers novel, but didn’t realize until I started reading it that it was part of another series AND a young adult (YA) novel at that!

I must admit I possibly slumped a little on discovering this but surprised myself by reading it in one session.

15yr old Jen McDaniels’ life spices up when marine biologist Annie arrives on Whidbey Island. Annie’s staying in a caravan near Jen’s house to study Nera, a black seal who returns to Whidbey Island at the same time every year and Jen (in need of the pocket money) reluctantly agrees to help Annie with her dissertation. 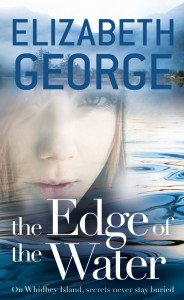 Nera’s annual visits have become a tourist attraction but the seal itself is a source of both great joy and angst to the island’s community.

Also in the mix is Becca – who features in George’s previous YA novel – and who is blessed (and cursed) with the ability to read others’ thoughts. (She’s also on the run from her murderous step-father, but that’s obviously the focus of the first book in the series).

While Jen begrudges Becca her boyfriend (and Jen’s former bestie) Derric and teases her mercilessly, it becomes increasingly obvious that the girls’ worlds will collide when it comes to Nera and her secrets.

There are a heap of players in the novel, some of whom undoubtedly appeared in the first of the series. All are interesting however, and I suspect will come and go in future books.

I’m not usually a fan of YA OR the fantasy genre but the twists in this novel – while not-necessarily plausible for a logic-fiend like yours truly – kept me guessing.

I actually enjoyed all of the characters and their stories so much I wasn’t overly concerned about the believability of the fantasy side of things and… like I said, I read it in a sitting. I’ll definitely be looking for its predecessor and any subsequent novels in the series.

Elizabeth George’s The Edge of the Water is published by Hodder and Stoughton and Hachette Australia.

Disclaimer – I received an advance copy of this book from the publisher via NetGalley for review purposes. For ALL of my reviews follow me on Goodreads. 😉