I must admit I’m a little undecided about Gregg Hurwitz’s latest novel. I saw Gregg speak at the Brisbane Writers’ Festival half a dozen years ago and became a bit of a fan. He obviously writes well and develops great characters, however I realise my appreciation of his work depends a little on what he’s writing about: the topic and backdrop, rather than the plot itself.

His latest for example, is less of a whodunit and more ‘action or adventure’ based. The staying alive-in-the-wilds thing is not really MY thing – though I was (bizarrely) once a huge fan of the likes of David Morrell, Len Deight0n and Robert Ludlum.

Don’t Look Back features Eve, who’s shocked when her husband of almost 10 years confesses to an affair and moves out (and on) with his much-younger Danish girlfriend. As Eve has already booked anniversary flights to Oaxaca in Mexico she decides to go ahead with the trip alone in an attempt to break out of her comfort-zone.

Once in Oaxaca Eve finds herself part of a small group – with just 5 other tourists along with guides, husband and wife, Neto and Lulu. 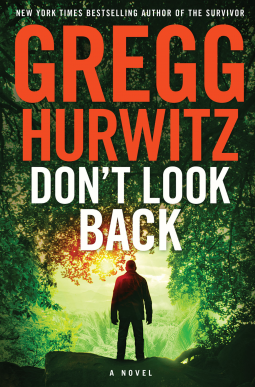 Eve is making a toilet stop away from the group when she sees a hut in the middle of nowhere and a very aggressive looking bearded man throwing a machete at a target in the shape of a human. When the man senses he’s being watched Eve runs away, stumbling over a camera in her escape. She later discovers the camera, which features pictures of the man, belonged to a former tourist who disappeared mysteriously.

It doesn’t take long before Eve and her fellow travellers discover the bearded man’s identity – which makes his subsequent pursuit of the group understandable. (Sort of!)

Eve surprises herself as she faces up to her fears and fights to return home to her son as their enemy picks off her fellow travellers one by one.

Hurwitz does suspense and drama well. Eve and her fellow travellers are realistic characters… but for me the story itself wasn’t appealing. There were no surprises. And, well… Eve’s feats struck me as a little unbelievable.

My minimal interest in (and knowledge of) Middle Eastern conflict (sorry!) and the jungles (flora and fauna) of Mexico undoubtedly played a huge part of my #mehness about Hurwitz’s latest novel. But action fans or lovers of the adventure-type thriller will certainly appreciate the amount of research which has gone into the novel, may find this right up their alley.

Don’t Look Back, published by St Martin’s Press will be available from 19 August 2o14.