As an aspiring writer (who doesn’t actually write), I occasionally come across an author who incites a bit of ‘writing envy’. Often there’s no rhyme or reason… and my tastes range from Helen Fielding’s Bridget Jones, to Robert B Parker’s Spenser to Anita Brookner’s constantly magnificent and stylistic prose.

Mostly – when reviewing books – I comment on the plot and characters. I find I only notice the ‘writing’ if it’s exceptionally good, or exceptionally bad (poorly written or lots of waffle). 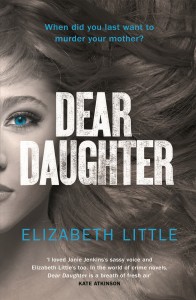 I was a little uncertain when I commenced Dear Daughter as I struggled a little with some of the pop culture references (which I sometimes find a bit forced and believe can really ‘date’ a book) but fortunately they didn’t continue and I settled into an excellent read.

Teenage society girl-around-town Jane Jenkins is best known for her increasingly bad reputation, until she finds her mother’s bloodied body – her name written in blood by her mother’s hand.

With no other suspects and all evidence pointing to Jane, she’s found guilty of first degree murder in a seemingly clear-cut case.

We meet Jane 10 years later when (at 27 years of age) she’s being released from prison after her conviction was overturned as a result of bungled evidence gathering in the crime lab.

Unfortunately for Jane, in the court of public opinion she’s still guilty and only her lawyer, Noah believes in her innocence.

Jane herself isn’t sure what happened on the night before she found her mother’s body and (in fact) believes she could be guilty. They’d fought (as usual) and Jane’s partying meant her own memories of the night in question were very vague. She did (however) overhear her mother arguing with a man about her rarely-mentioned past. 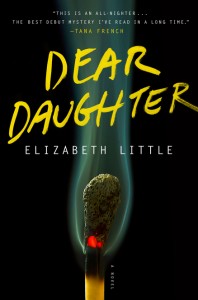 Determined to find out what happened to her mother Jane dons a disguise and sets off to South Dakota as Rebecca Parker, historian.

Only knowing her mother as a socialite and philanthropist with a trail of wealthy husbands, Jane/Rebecca soon discovers her mother had a past she kept hidden – perhaps with good reason.

Although occasionally frustrated by her single-mindedness, I loved Jane’s sassiness. We get a glimpse of life with her difficult mother and learn more about Jane’s own journey into adolescence and adulthood through a series of flashbacks.

I didn’t pick the twist and there is enough happening to keep readers occupied and guessing throughout.

It would have been a 4.5 star novel, but I was a tad disappointed at the ending – and I will admit to almost screaming at the book’s conclusion… but that’s just me!

All in all, an excellent debut novel and I look forward to more from Elizabeth Little.

Dear Daughter will be released on 31 July via Viking (Penguin Group) and Random House.

I received an advance copy of this novel via NetGalley for review purposes.