It’s rare that I’m undecided about a book but that was most definitely the case for much of Wil Carver’s latest novel, Dead Set.

There’s something really clever about the first person present (or bizarrely combined future/past) tense Carver often uses in the novel, but it takes some getting used to. “How does that person know they’re about to get killed?” I found myself wondering, before realising they didn’t. Rather, as we’re reading what’s happening, the characters themselves are describing what they (later) know to occur. It’s hard to explain. Obviously.

However, it gives us insight we wouldn’t normally have and makes us privy to almost everyone’s innermost thoughts – a luxury we don’t often have. And like I said – it’s actually kinda clever. 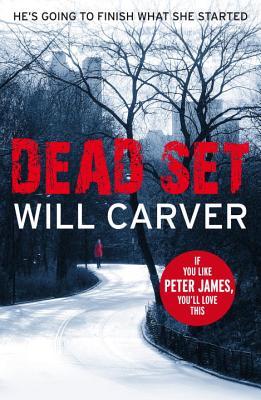 Dead Set commits the sin, which I’ve complained about previously (not a sin against humanity – fortunately – just one of my own personal peeves!).

I haven’t read Carver’s two previous novels and will most definitely have no reason to read his first book, Girl 4 – as this is a very obvious sequel (and I know whodunnit – and who continues to ‘do’ it).

I first meet Detective Inspector January David when he is on leave; what he describes as a ‘democratically enforced sabbatical’.

We quickly learn that his wife (Girl 4 from his first novel) not only survived the rampage of the mad and murderous Eames, but was also his lover. Despite this, David appears to still be in love with his duplicitous and missing spouse; while also continuing to be plagued by the childhood disappearance of his sister Cathy.

David is prone to premonitions and he’s bothered when these restart and victims are eerily similar to those of Eames who is firmly ensconced in a psychiatric ward.

He’s surprised to discover the latest batch of killings take place in the US but when strange and secretive FBI agent Marquez requests David consult on the case he jumps at the chance – certain Eames is controlling everything from his hospital ward in the UK.

David also seems to know that his estranged wife now lives in the US and he’s determined to find her. Despite everything.

Unsurprisingly the nexus of David, his wife, Agent Marquez and a range of bit-players, including victims (Girls 8 – 12) meet in a catastrophic circumstances

I should note that – in the background – David’s former team are investigating the murder of a four-year-old girl who’s literally been hugged to death. It’s an interesting case and one that quite possibly deserved its own novel.

Although we’re privy to some of what’s happening in everyone’s minds, there are enough twists and turns at the end to surprise even the most astute of readers.

Dead Set by Will Carver has been published by Arrow Books, Random House and is available from 21 November 2013.

* I received an advanced reader copy of this book from the publisher via NetGalley for review purposes.