I haven’t read any of Kate Forsyth’s previous work but note she has quite a few books under her belt, including some children’s fiction. Her novels seem to lean strongly into the historical / fantasy genres, so it seems (to me anyway) that her latest release, Dancing on Knives is a bit of a departure for the Australian author.

Twenty year old Sara has not left her family’s farm for five years. We never really learn what’s behind her fear of what lies beyond, but she, her brothers and half sister have endured a difficult life with their father, the (once) renowned painter Spaniard Augusto Sanchez.

Initially living in Sydney and married to his early muse Bridget – his wife and mother of their four children – Augusto becomes increasingly absent, apparently working in his studio… until it’s obvious that he’s living the stereotypical and ‘somewhat-wanton’ life of an artist.

Bridget decides to leave and moves back to the family farm left to her by her father. A briefly contrite Augusto joins the family until Bridget’s death when he moves his long-term mistress and ‘their’ daughter in – much to the horror of Bridget’s family and his other children.

It’s obvious this just isn’t going to end well. Bridget’s family never liked the different and swarthy Augusto, and when his second wife leaves him, his life spirals out of control. Augusto drinks away his days (and savings) while bullying his children who – despite everything – remain desperate to please their still-enigmatic father. 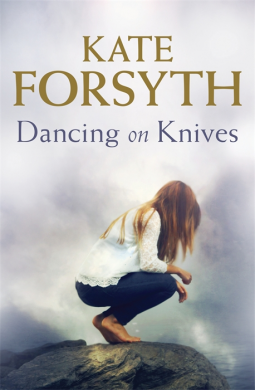 Back to the present and having recently rediscovered his creative mojo, Augusto is off painting when a severe storm breaks out. Her siblings are oblivious to any dangers, but Sara (taking after her paternal grandmother, Consuelo, a fortune teller) senses something is wrong. And, eventually Augusto is found – having fallen down a cliff and only just clinging to life.

The situation forces Sara out of her self-imposed exile and she has no choice but to face the difficult truth – that someone, possibly in her own family, may have been involved in Augusto’s accident.

Dancing on Knives is a novel Forsyth started over thirty years ago and it’s been released by Random House in (what is essentially) its fourth incarnation.

Given that the book was started by Forsyth as a 16 year old, the convoluted family dynamics are particularly impressive. Indeed, Augusto’s self-absorbed behaviour and general disdain (for anyone and everyone) results in a legacy of unrest, impacting on his own children and their relationship with his wife’s family.

There’s a bit of romance as Sara finds herself attracted to the young man appointed by their uncle to help manage the farm, but essentially it’s a story about family. About relationships, responsibility, love and trust.

Although I think the characters could have been a little stronger and although I tend to prefer crime fiction I enjoyed the unfolding story of the Sanchez family.

Dancing on Knives, published by Random House Australia was released on 2 June 2014.

I received an advanced copy of this novel for review purposes.