I know almost nothing about Mormons. I wondered why this was until after googling I discovered that only between ¼ and ½ of 1% of Australians identify as Mormons.

As a crime fiction / mystery novel fan, I’d selected The Bishop’s Wife by Mette Ivie Harrison based on the promotional / backcover blurb; so hadn’t expected the novel to be quite so focused around the Mormon faith and LDS church.

I struggled a little as a result in the beginning. I don’t mind learning new stuff, but I struggle to remember what I already know let alone adding in new stuff about Wards and Bishops and the notion of being ‘sealed’ to loved ones, things that – though interesting – I may never need to remember again. 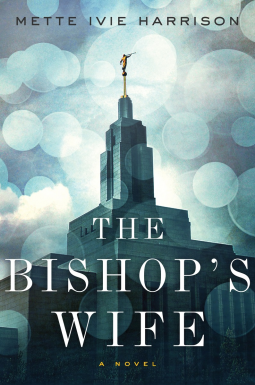 But – after I got past my “This is all too much” thinking – I really enjoyed the novel and actually read The Bishops’s Wife in a night.

The novel is set in Utah in Draper and we’re watching events unfold through the eyes of the (current) bishop’s wife, Linda Wallheim.

The youngest of Linda sons is finishing high school and although she supports her husband Kurt in his work, she’s struggling to find her place in the world now her children are grown.

Linda sees herself as redundant and wishes she’d done more with her life when younger. She clearly admires modern day Mormon women who have careers and families.

However, Linda undersells herself A LOT. She’s by no means meek or superfluous to those around her. Indeed, her husband respects her opinion and appreciates her pig-headed nature. And throughout the novel Linda plays a role in changing people’s lives for the better though is constantly gobsmacked when her advice is sought. I suspect she’s been like that all along but it’s only now – when she’s feeling dissatisfied and struggling with her direction – that she notices the impact she has on those around her.

Linda’s noticed Carrie Helm, wife of Jared and mother of five year old Kelly. And when Jared confides in Kurt that Carrie has run off Linda wishes she’d reached out to the young woman. But when Carrie’s parents accuse Jared of domestic violence and playing a role in her Carrie’s disappearance Linda becomes suspicious of Jared and concerned about Kelly’s wellbeing.

As Linda becomes overly involved in the case we learn that she and Kurt lost their only daughter over twenty years before. Linda (understandly) still mourns her stillborn and struggles with her feelings of envy towards other mothers of daughters.

There’s another mystery in the background, as Linda befriends Anna, the wife of a dying elderly man – and more long-buried secrets are unearthed.

This novel’s well written and it’s absorbing. Once I became accustomed to the detail devoted to the Mormon faith I came to appreciate Linda’s insight and her intelligent questioning of aspects of her faith.

The key characters in this novel – Linda, Kurt (and to a lesser extent Jared, Anna and Linda’s youngest son Samuel) – are far from stereotyped clichés. Linda in particular – flaws and all – is very real and brutally (pragmatically) honest.

“He looks handsome, doesn’t he?” said Anna stepping back.
He still looked dead, I thought.

The Bishop’s Wife is not a police procedural or typical crime fiction but the underlying mystery is intriguing. As Linda picks away at the community’s secrets, she what she uncovers is surprising. I’d be shocked if many could pick the twist/s.

As I said, I ended up polishing it off in one night and very much enjoyed being in the head of the kind, smart and sassy Linda Wallheim.

The Bishop’s Wife by Mette Ivie Harrison will be published via Soho Press on 30 December 2014.

I received a copy of this novel for review purposes from the publisher and NetGalley.