I read for enjoyment and for some sense of escapism. It doesn’t actually matter where a book takes me. Anywhere (but here) is fine. That doesn’t mean, however, that I don’t enjoy novels that challenge me intellectually, emotionally or morally. In fact there’s nothing I love (and hate!) more, than a book that haunts or plagues me for days after I turn the last page.

Australian Kate Belle’s latest, Being Jade, is one such novel, one which forces we readers to confront our thinking; our own values, morals and beliefs.

Angry and mysterious Jade is the fatherless daughter of an alcoholic prostitute. Banjo is infatuated and – though unattractive and awkward – befriends the troubled youngster. Later, Banjo’s community-minded family take Jade in when her mother dies; but are shocked when – at only 18 – Banjo informs his parents the pair are to marry.

While her husband is obviously smitten. Jade seems relieved but indifferent. Banjo discovers early in their marriage that his wife’s been unfaithful and there’s the inevitable confrontation. Although Jade swears she loves Banjo and will never leave him, she steadfastly refuses to remain faithful. Her logic makes complete sense to Jade but Banjo remains incredulous (as do many readers I suspect).

Over many (many) years Jade disappears for days at a time, only to return to her waiting husband. He forgives her each and every time. But cannot forget. 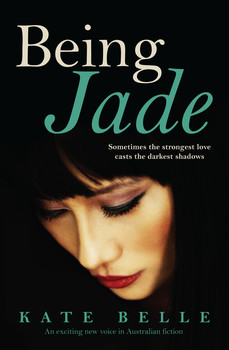 Finally he leaves and never returns.

The fact that Banjo dies (in an accident) when he finally makes a stand is frustratingly poignant.

The couple’s now-grown daughters are left to pick up the pieces of their parents shattered life and understand what kept the couple together and constantly tore them apart.

While older daughter Cassy has always struggled to understand her mother’s behaviour and father’s response, Lissy realises she’s long ignored the tense undercurrents within her family.

It’s easy – as a reader – to judge. It’s easy to dislike or even hate characters. And the power of Kate Belle’s work is the confronting subject matter – beautifully written at times – passionately eloquent and littered with blunt realism.

I found myself wavering. Prevaricating. I hated Jade, I mean one HAS to… surely?

What a manipulative bitch! From the get-go Banjo was her escape. She ‘played’ him all along – knowing he’d never be enough but content in the knowledge he would put up with whatever she threw at him.

Then I’d think about what Jade went through as a child. I could see she was ‘damaged’ or vulnerable. She was needy. Banjo wasn’t enough – but not in the way he thought.

And then I’d wonder how on earth that bitch could think it was okay to wantonly flaunt her lifestyle – her own children suffering the shame which haunted her own childhood.

I’ve never been in a long-term relationship (or in love for that matter) so it’s easy for me to stand firm on the issue of fidelity, but Banjo’s musings clearly articulate his dilemma.

It’d be easy to think of him as desperate, taking whatever he can get from the woman he considers to be out of his league, but it’d be trite to write their relationship off as one in which she takes the security and support for granted while he caters to her every whim. It perhaps starts like that, but eventually becomes more complicated.

My only issue with the novel was some initial confusion in relation to the change in point of view from Banjo to Lissy. Banjo’s chapters are written in first person but Lissy’s in third person. It wasn’t really a big issue but just something I noticed so distracted me from the story at hand.

Being Jade is book you ponder later; fighting with your own morals and beliefs. I must confess I’m a spiteful kind of person so I mostly wanted Jade to suffer, but the novel also transports we readers through anger, regret and sadness. Perhaps we even come to the point of understanding. (I’m still deciding…)

Being Jade was released by Simon and Schuster in June 2014. And I received a copy of this book for review purposes.

Linking up with the IBOT team today.