I’ve been reading so many advance copies (previews) of books lately I haven’t had to head to my local library.

Before last August / September however, I had to keep feeding my reading habit so I’d find myself spending A LONG TIME going back and forth along rows and peering into shelves to find something I hadn’t read. And unfortunately with increasing regularity I’d get home and start a book only to realise I’d read it before. #Inothernews: at least my taste is consistent.

The same thing happened recently with a preview of a book. It SHOULD be impossible (given that I’m supposedly receiving books yet to be released), however I discovered after receiving the book (electronically) that it was being re-issued. The back cover blurb obviously didn’t sound overly familiar (yet again caught my attention!), but the name and author were eerily familiar and as soon as I started reading I discovered my lapse in memory. 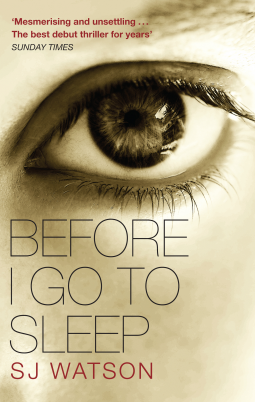 Which was actually quite poignant… (segway, schmegway 🙂 )  because the book in question is about a woman who suffers from amnesia and loses new memories (of each day) when going to sleep at night.

Kinda like Drew Barrymore’s character in 50 First Dates, Christine wakes each day surprised by her 47 years and with few memories past childhood. Her husband Ben has created a world to ease her into each new day with notes and albums, but it’s not enough. Christine still has questions.

We discover (along with Christine) that she’s been secretly working with neuropsychologist Dr Nash to try to regain her memory. Each day the doctor calls to tell her where she’s hidden a journal she’s keeping in which she’s documented memories she recovers along with each day’s events.

What she discovers on reading the journal (each day) is that her world may not be quite as it seems and even the story of the accident which left her with amnesia 20 years before may not entirely reflect the truth.  Understandably Christine struggles to know who she should trust.

According to Goodreads I first read this novel in late 2012 and its re-release is a result of an upcoming film based on the book starring Nicole Kidman and Colin Firth. As a lot of the novel is narrated by Christine/her journal I’m intrigued how it will translate onto screen.

I enjoyed this book and didn’t entirely guess the twist. It’s one of those books that keeps you pondering later as you’re compelled to think back to see if you missed something which would have given the game away. As I did that, however I did identify a few plot holes which (in retrospect) didn’t entirely ‘mesh’.

And then of course the ‘need-to-know-all’ sore-loser within me wondered what would happen if Christine had a daytime nap. Or… if she stayed awake for days?!

My father had a type of dementia which meant he couldn’t transfer new stuff into his long-term memory (or even retain new memories in the short-term) so I had some insight into how disempowering ‘not knowing’ can be.

Before I Go To Sleep is the debut novel by SJ Watson (a guy, in case you were wondering!) and is to be re-issued on 27 March by Random House UK Transworld Publishers and (I think) Penguin in Oz.

* I received an advance copy of this book (well, sort of!) for review purposes.