A Dark and Twisted Tide is the fourth in Sharon Bolton’s Lacey Flint series, but the first time I’ve come across Sharon or her former detective Lacey, who has apparently surprised everyone with her decision to return to uniform and the water police.

I was (and am) a little murky (hee hee) on her past/ backstory but gather Lacey’s life’s been at risk more times than she’d like. So after almost drowning, rather than continuing to climb the ranks, Lacey now lives on a yacht and spends her days as a Constable in the Metropolitan Police Marine Unit.

While swimming in the Thames (something fraught with danger apparently because of currents and the like – not just because of the murky (possibly) disease-ridden water) Lacey comes across a body. Partially wrapped in a sheath it’s discovered that the young woman was a Pashtun who’d fairly recently arrived in the country. It’s a case she hands over to her former homicide colleagues – grudgingly.

However, on discovering the Thames is being used by people smugglers, Lacey realises there may be some connection and when she ‘stumbles’ across more bodies she realises there’s something more sinister at play. 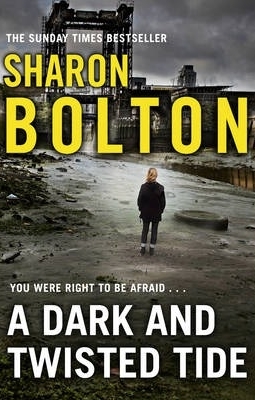 This novel has a bit going on. Detective Inspector Dana Tulloch and her partner are in the midst of dealings with a fertility clinic; Lacey’s love interest who’s been working undercover may, or may not, be dirty and may, or may not have shot another police officer; we encounter people smugglers and traffickers; and then there’s Lacey, settling into life amidst an array of riverboat dwelling characters, while possibly being stalked by someone unknown.

I didn’t LOVE love this novel, but I think it’s more because I was missing some backstory. There were aspects to Lacey I really liked but some large gaps as well. Lacey’s history (for example) sounds fascinating but we were only offered glimpses in this novel.

So, while A Dark and Twisted Tide was only a 2.5-3 star novel for me, I’d be willing to try an earlier novel or two – particularly to find out a bit more about Lacey – or whoever she may be…

As a complete aside, Sharon (SJ) Bolton’s got one of the best author websites I’ve actually ever seen!

A Dark and Twisted Tide, published by Random House is available from 3 June 2014.

* I received an advance copy of this novel for review purposes