It’s been an unusual week for me as I’m getting used to some additional commitments and attempting to develop some new routines. #Spoileralert… I’m failing badly so can really only improve!

Reading-wise everything was pretty normal. I really only read at night and it’s a bit of an end-of-the-day / pre-evening ritual for me so as planned I started the week with Lisa Jackson’s Never Die Alone before picking up Tania Carver’s Heartbreaker which I very much enjoyed!

I really really enjoyed Linwood Barclay’s upcoming release Broken Promise, which I’ll be blogging about in a day or so and finally I read Pretty Baby by Mary Kubica. I missed her novel The Good Girl, which everyone RAVED about… so didn’t want to miss this one! 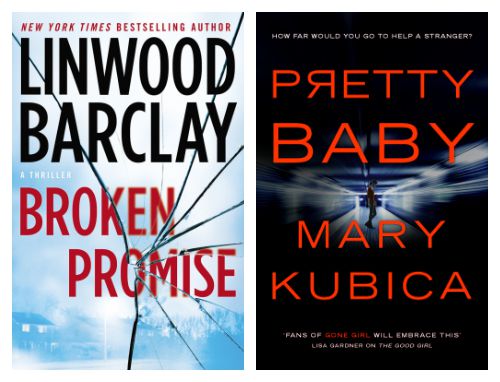 Very little. In fact, I only posted twice during the week although I started three other posts I just didn’t get back to. I hope I get my act together a little this coming week.

I reviewed two books in Goodreads, starting with Lisa Jackson’s Never Die Alone which I struggled with because it came part-way through a series and assumed a lot of knowledge. I also reviewed Michael Robotham’s The Night Ferry on Goodreads. It was an accidental re-read which I very much enjoyed.

I ended the week by reviewing Heartbreaker on the blog and my only other post for the week was one in which I contemplated the idea of some inexpensive renovations to my apartment (and shared my penchant for both industrial minimalist and boho chic. Which may, or may not, be mutually exclusive!).

I started my new part-time job. It’s really just Saturday mornings but I filled in on Monday as well and then did about a day or so from home to transcribe stuff and do some admin duties. The project management work I’m doing also kicked off this week but didn’t involve a lot of hands-on time.

Next week I’m filling in on the part-time job for three days so I’ll need to get my act together time-wise. I can’t believe I once worked full-time, had a long commute, gymmed every lunchtime and still blogged for 5-6 days a week. Having said that writing book review posts take much longer than the blog posts I shared in my Diet Schmiet blog days. 🙂

I had a stack of new books arrive last week, including 6-7 new hardcopies.

A heap of the books on my to-be-read pile are being released in August and I have to admit I can’t even decide where to start although (as usual) it will be chronological!

What’s on your agenda – reading or otherwise?

Linking up again for a book blogging check in with Kimberley from the Caffeinated Book Reviewer for the Sunday Post.