When I reviewed Joanne Tracey’s first novel, Baby It’s You I mentioned that—though we’ve never met—I think of Jo as a kindred spirit… a virtual friend. Her blog is one of my must-reads and I picture her as a more evolved and high-achieving version of me, following through on many of the things I just talk about.

I guess it’s no wonder then I very much relate to her writing and her books… something which was even more evident in her latest release, Big Girls Don’t Cry.

Abby and Brad have been together for over three years when Brad half-heartedly proposes. It’s not that he doesn’t mean it or doesn’t love Abby, but the fact it comes as an after-thought which causes Abby to refuse his offer. Brad’s about to head to Denmark on fellowship and wants Abby to go with him. She uses the excuse that she’s up for a partnership at work to say no.

Plus… they’d planned a trip to Bali that Abby doesn’t want to miss.

We soon learn that Abby’s had a difficult upbringing. Her beloved father died when she was eight and her mother moved on soon after, creating her perfect family with more kids and a politician husband. Abby never really recovered from her father’s disappearance from her life and has spent over twenty years believing love to be a competition of sorts: the person who loves the other more, will undoubtedly lose (their loved one or themselves) in the end.

Brad knows Abby’s history and understands her antipathy towards marriage and commitment, but he’s tired of her prioritising work and frustrated (on her behalf) that the oft-promised partnership never seems to eventuate.

Their break-up is just the first in a series of life-changing events for Abby as she discovers secrets about her parents’ relationship and attempts to understand how and why her father died. On top of this a potential new romantic interest causes havoc in her workplace and threatens the career she’s worked hard to build.

Tracey’s created a very real and complex character in Abby and I adored her. She could be me. Or someone I was friends with…. I found her really relatable. Her best friend, Andi popped up as a minor character in Tracey’s first book and plays a stronger support role here.

We meet Brad briefly, but constantly feel his presence as we learn that he and Abby were childhood friends—before meeting again as adults. 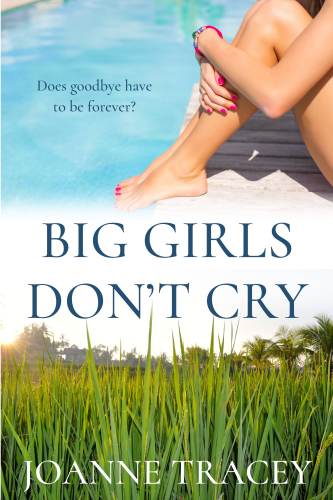 I guess Tracey would classify this novel as chick lit. The book however offers far more than your usual romance as there’s an underlying theme of relationships and the impact our past can have on our future. Tracey’s blurb explains this better:

Big Girls Don’t Cry is a story about families, about the lies people tell to protect themselves and those they love, and about how dealing with yesterday can help you find love in tomorrow.

Tracey’s writing is really comfortable and I love the voice she’s used. It’s one which is relatable and engaging and I very easily read this book in a sitting.

And there were tears. I sobbed hysterically in one particular scene and was reminded I did so during her first novel as well.* I realised then I was well and truly hooked (by the characters and in the plot) and I cried during many of the final chapters as well.

As in her first book Tracey shares her love of Bali (and all-things-Balinese) – her knowledge of the place, its customs and particularly its food are all reflected here.

But it wasn’t until after I finished I realised what I really liked about this book (in addition to the characters) was the time and focus Tracey allocates to Abby’s professional life and her workplace. This is important for two reasons:

Firstly, it’s integral to the plot, as Abby’s prioritised work over many other things and gone ‘above and beyond’ for the much-promised partnership. Tracey brings her own experience as a project manager into the book as Abby and her colleagues are managing the transition of a large project.

I did wonder if there could be a danger of some readers finding the terminology and detail of Abby’s work to be a bit too technical, but guess I’ve read novels where medical terminology and the like are tossed about. Their meaning isn’t integral to the plot but adds layers of complexity to the story. As someone who’s worked in project management myself (however) I found this all very familiar.

Secondly and more importantly, work and work environments are such a big part of the lives of many women I know and Tracey’s acknowledgement of this (in both books) and attention to professional challenges and office politics and the impact it has on our lives, takes this novel to a level that many others don’t venture.

I very much enjoyed this book and think it’s stronger than Tracey’s first which was probably a little more traditional ‘chick lit’. Big Girls Don’t Cry avoids the usual clichés of romantic fiction and is less about ‘falling in love’ and more about ‘moving forward’. #sorryfortheapostrophes

After I finished this book a friend asked what ‘sort’ of book it was. I’m a genre-lover but not great at definitions (and don’t really care for them, preferring to describe the book itself), but if forced I’d describe this as ‘the thinking woman’s chick lit’.

* I looked back at the first book to remind myself of that scene and found it was similarly themed – a pivotal scene where the characters have reached out to someone. It wasn’t until I read this one (a call Abby makes from Bali on her second trip) that I remembered having a similar (hysterically sobbing!) reaction to a scene in the first book.

** Link is to Amazon Australia, but it’s also available on Amazon International.