In 2013 Anna Romer released her much-lauded debut novel Thornwood House. I completely missed that, but around this time in 2014 I read and reviewed Anna Romer’s second book, Lyrebird Hill, a quintessentially Australian novel unfolding in two timeframes. In that review I commented on my usual reticence to read historical fiction, but found myself intrigued by the secrets, lies and family drama being unearthed.

Romer’s topped that with her latest novel, Beyond the Orchard. It’s a book that took me by surprise, forcing me to read it in a sitting (!!!). Romer’s talked in interviews about her inspiration – from stories, fairytales and legends and her fascination with old letters, diaries and long-held secrets. It brings a lyrical and almost mystical quality to her work that has the ability to enchant readers.


Lucy Briar has arrived home in turmoil after years overseas. She’s met her fiancé in London and has her life mapped out, but something is holding her back.

Hoping to ground herself and find answers, Lucy settles into once familiar routines. But old tortured feelings flood Lucy’s existence when her beloved father, Ron, is hospitalised and Morgan – the man who drove her away all those years ago – seeks her out.

Worse, Ron implores Lucy to visit Bitterwood Estate, the crumbling historic family guesthouse now left to him. He needs Lucy to find something– an old photograph album, the very thing that drove Ron and his father apart.

Lucy has her own painful memories of Bitterwood, darkness that has plagued her dreams since she was young. But as Lucy searches for the album, the house begins to give up its ghosts and she is driven to put them to rest.

And there, held tightly between the house, the orchard and the soaring cliffs, Lucy uncovers a long-hidden secret that shattered a family’s bond and kept a frightened young girl in its thrall ... and Lucy discovers just how fierce the lonely heart can be.

Beyond the Orchard is set in 1930 (ish) and 1993 and what I particularly love about Anna’s books is her ability to bring a time and place to life. I wondered if Anna’s background as an artist helps make settings vivid, or if she is particularly good at living in the ‘now’ and absorbing the world around.

I think it’s a combination of both. My background as an artist trained me to absorb details closely. Just say I’m drawing a tree, I’ll study it a long time until I begin to really absorb the colours in its bark, the way its limbs twist into tortured shapes against the sky, the weight of its shadow on the ground.

It’s also part of my nature to pay attention to things, especially when I’m in a natural setting. But that’s usually less about art, and more about survival! I’ve trained myself to look out for potential dangers. Snakes. Falling branches. Rabbit holes and loose rocks. If I’m out trekking, I’ll pinpoint a landmark in case I get lost. I note seasonal changes: the appearance of wildflowers, or snow clouds, or a new kid among the feral goats. But I also observe how a particular place makes me feel – elated, or nostalgic, overly alert, or maybe completely spooked out. All of it, fodder for stories.

I’m quite sure all writers are the same. Always on the lookout for a story idea. You learn to fine-tune your senses to the places and people around you, siphoning off things of particular interest – someone’s personality quirks, or a dazzling smile, or snatches of talk overheard in a shop. Everything is raw material that can be recycled to make a story more authentic. No one’s born with this skill, but as a writer, you train your mind to notice everything.

I was also interested in the creative process and wondered if it’s similar for drawing / painting and for writing.

I think the processes are really quite different. At least they are for me. Drawing and painting is very intuitive, a right-brain function. When you go into the zone, your awareness becomes purely about line and colour and space, and it sweeps you away. I love the sensuality of bright colours, the watery slosh of paint on paper, and the seductive freedom of letting your brush trail where it will. 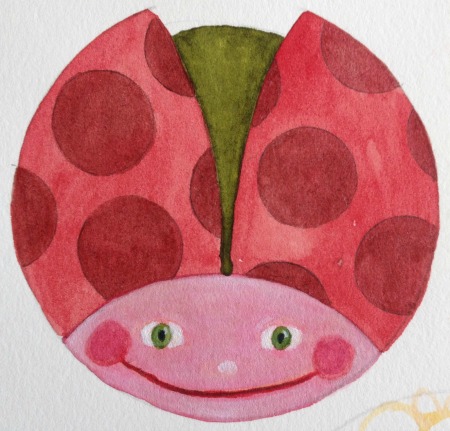 Language is a logical left-brain task, which might explain why I find writing more of a challenge. Translating the colourful scenarios and relationships I see in my mind into written language, and then shuffling them into a logical sequence is really quite a job sometimes! Yet it absorbs me endlessly, it’s very addictive.

When I was painting, there were so many emotions and thoughts I wanted to express, but I felt limited by the edges of my canvas. My drawings and paintings told a story, but I always found myself wanting to describe those stories in more complex detail. I wanted to delve into characters’ lives, describe the beauty of a changing landscape, build intricate histories, and most of all explore intense emotions. Writing a story lets me do this. Somehow, it weaves the two processes together; I get to daydream and plot and plan to my heart’s content, and then paint lush colourful pictures with words.

I adored this novel which features great prose and an intriguing narrative (not to mention the re-imagining of a more macabre Rumpelstiltskin). In Lyrebird Hill I felt drawn to the characters in one of the plots over the other, but this time around, both had me well and truly invested.

Beyond the Orchard by Anna Romer was published in Australia by Simon & Schuster and is now available.

A huge thanks to Anna (and Simon & Schuster) for her time. And I’d encourage you to check out the series of websites participating in the blog tour as part of the release of this book. 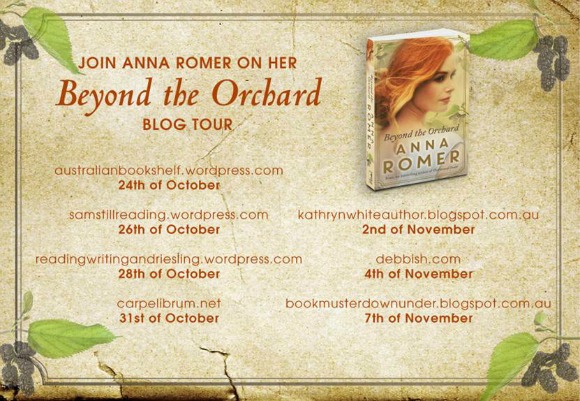