I’ve mentioned a zillion times that I’ve long been an avid reader. In fact, at various times in my life I’ve been somewhat addicted to the written word and tried to detox. (I know that might not make sense to some, but…)

Getting access to reading fodder hasn’t always been easy however and I’ve struggled when living overseas on a number of occasions.

I was speaking to someone recently about my time in Cambodia which brought back some interesting memories.

I was to live there for a year on a volunteer program back in 1997, but increasing unrest (later followed by a coup d’etat) meant I left after just seven months.

Fortunately for me, my previous volunteer experience in Mozambique (in 1995-1996) prepared me well for my placement in Phnom Penh. (So much so that I was pleasantly surprised on my arrival.)

My apartment was fine – it belonged to a Khmer family who lived downstairs, but it was pretty basic. I had running water most of the time, but my electricity was very intermittent. 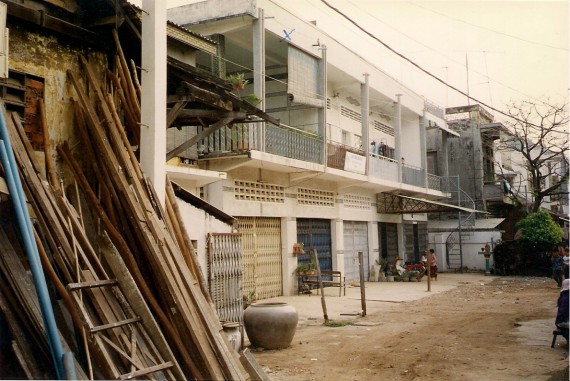 My place in Phnom Penh. (Upstairs on the left!)

A TV was out of the question and I had no telephone, so I sought comfort from my discman with little battery-operated speakers and lots of candles. (Along with chocolates and MSG-laden chips and snacks from the foreign supermarket. Oh, and Australian beer.) 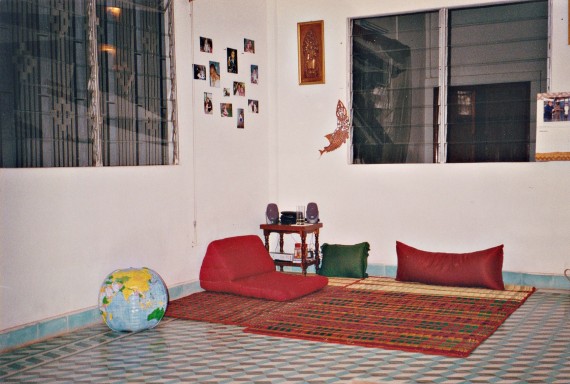 My reading and listening-to-music nook. (ie. My lounge room)

My working hours were pretty short and it wasn’t safe (at that time) to travel at night if you didn’t have a vehicle, so I spent chunks of my day at home, along with all of my evenings.

Fortunately very early on I discovered the fairly famous Bert’s Books and Guesthouse. Life was pretty stressful and scary at times, so I appreciated being able to lose myself in a book and – other than the occasional outing with friends and my abbreviated work days – most of my free time was spent reading. 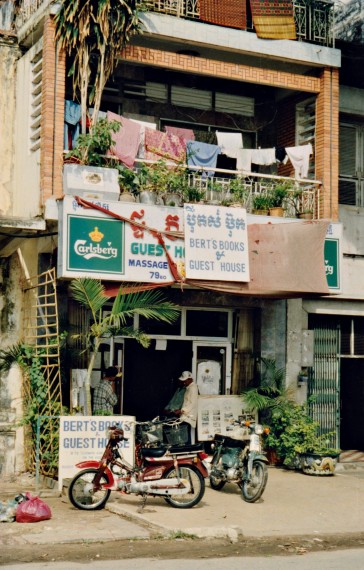 Nowadays – between work and other stuff – I manage about 3 books a week (two nights to finish one, plus a night off for other commitments).

In Cambodia I EASILY got through a book a day, so twice a week I’d walk the 30+mins each way (in the bloody hot sun) from my place to Bert’s and I’d buy a stack of second-hand books.

The deal was typical of a second-hand bookstore.. you pay full price (say $6-8, I can’t recall) for the (used) book and when you return the book, you receive half of that amount back. Which you then use to buy more. So it wasn’t like having access to a library, but relatively affordable for this poor volunteer.

And in retrospect, Bert’s and those (many MANY) books became my lifeline, so it was definitely money well-spent.

Are you a fan of second-hand book stores?
Any overseas tales of reading woes (or joys) to share?

I’m flogging my blog With Some Grace as it’s Friday.

PS. I left Cambodia in July 1997. I went back with the Australian Government for a month about a year later – and discovered Bert’s had gone. (I since discovered that it shut down around the same time I left. Hopefully there was no causal relationship! 😉