I wasn’t sure I was going to enjoy BAD Sydney Crime Writers Festival.

I’ve been to a few writers’ festivals and one can feel quite isolated as you drift in and out of sessions. There isn’t the sense of camaraderie you get at a conference… where you’re all staying in one spot and chatting over meals etc. However… what I didn’t realise is that the NSW State Library precinct isn’t as vast as Brisbane’s for example (where there are several cafes and various outdoor spaces). In Sydney there was far more socialising than I expected because it was hard not to keep bumping into the same people between sessions in the on-site cafe or library foyer.

I’d initially signed up for seven sessions plus the Ned Kelly Awards (on Friday evening), but ended up adding an additional session on Saturday as I really had no plans to play tourist or shop. And though my hotel room was stunning… (ie. thank god for that gift card that I HAD to use before it expired this month!) I figured I should make the most of being amongst such creative and passionate people. 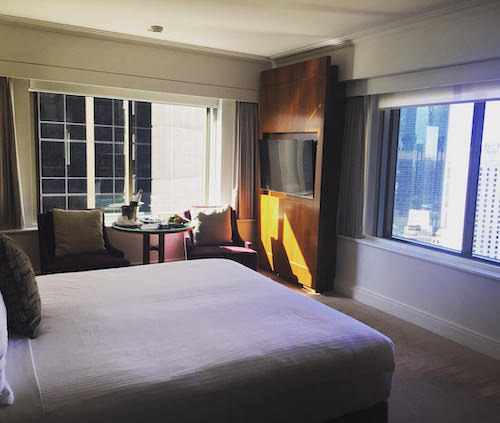 The sessions I attended were great. Unsurprisingly they were all from the ‘fiction’ stream rather than the ‘fact’ or ‘true crime’ stream and a few involved authors I’d heard speak before (Michael Robotham, Candice Fox, Sarah Bailey and Dervla McTiernan).

I also ‘engaged’ more than I expected.

I usually look at people who ask questions at sessions as attention-seeking wankers but I ended up asking a question in one session (as no one else did and I felt bad) and then asked another couple of questions in later sessions, cos I had things I wanted to know and felt less-weird about it.

Country Noir:  Catherine du Peloux Menage with Emily Maguire, Richard Anderson and Aoife Clifford. (It was nice to meet Richard in person as we’d been chatting on Twitter and I ended up spending a bit of time with Aoife who is absolutely lovely.)

This involved an interesting discussion re setting crime fiction in small towns. Richard talked about writing what he knows, Emily talked about the sense of ‘ownership’ others in a small community feel they have over victim and I laughed when Aoife was pragmatic and said it’s easier to hide a body in the country. And… if your mystery involves revisiting the same place years later you’re more likely to find the same people in a small community than you would in a city suburb. 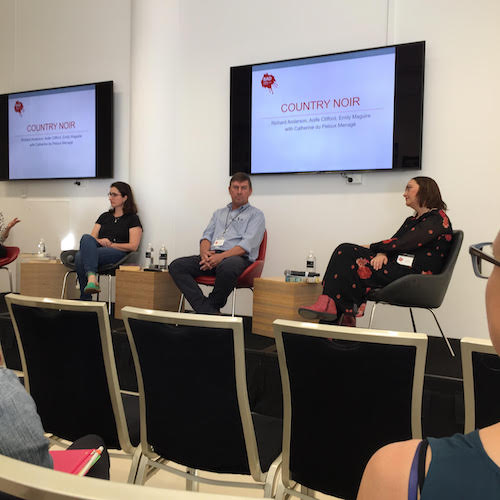 Missing Children: Suzanne Leal with Christian White, Felicity McLean and Caroline Overington
The three authors spoke of their inspiration (newspaper article, Picnic at Hanging Rock, and her own experience), respectively.  They talked a little about parents falsely accused and recent real life examples. I was kinda intrigued by a point they touched on but didn’t discuss at length… the dilemma of parents – would they prefer their child remain missing rather than know they’re dead? (And I apologise if I’ve worded that bluntly!) 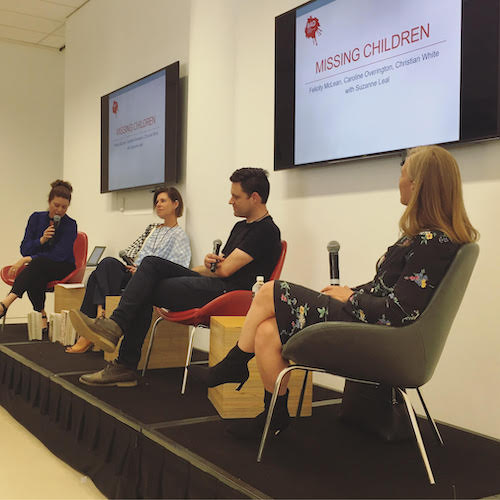 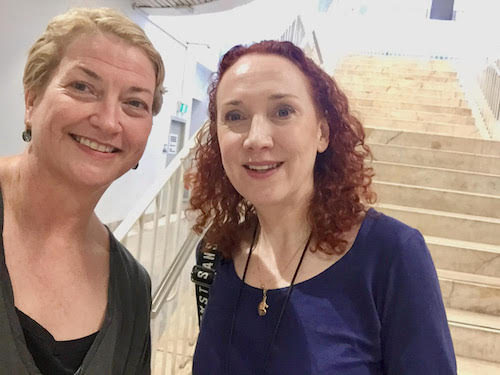 It was noted that the panelists (and many finalists) were women. Andy asked if the perception that ‘women can’t write crime’ still exists. (#Spoileralert: the answer was mostly ‘no’.) 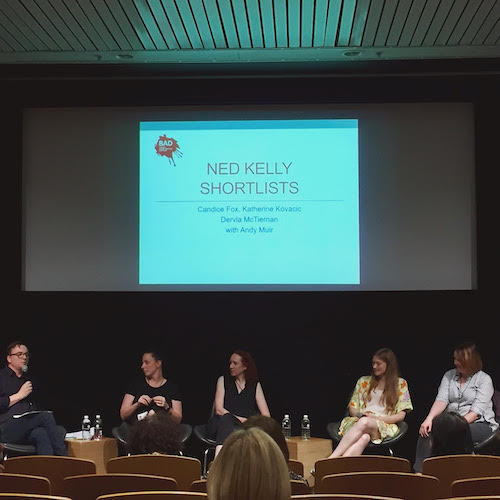 Spotlight on Michael Robotham
Michael was as entertaining as always. He asked for a show of hands re how many people had heard him speak before and 3/4 of the audience had. Thankfully (for all of us) he spoke about his new book and focused on its theme of lying. He also offered up some audience participation to remind us how often we all lie, for various (non-nefarious) reasons. 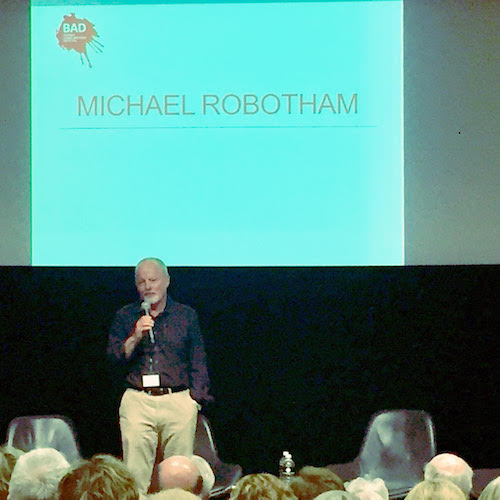 #MeToo Movement: Sue Turnball with Sarah Bailey, Katherine Kovacic and Leigh Straw
I chose this session because Sarah Bailey was speaking and I’d missed her the day before. Having said that I’m not really sure her character (Gemma Woodstock) was the best fit. I know she struggles with sexism in her work and though I was keen to hear from Sarah, someone like Bri Lee would probably have better suited the topic, as it was something she referred to in another session.

Katherine was able to speak from the position of the two women at the centre of her book (a victim from years before and art historian revisiting the crime). And finally Leigh who’s written about Australian true crime figures and I liked that she reminded us that women don’t always have to be a victim.

I actually posed a question to the panel at the end, reflecting on a book I read recently, The Whisper Network and potential misuse of the ‘me-too’ movement. I disliked the way that book seemed to speak on ‘my’ behalf and had the subtlety of a sledgehammer. 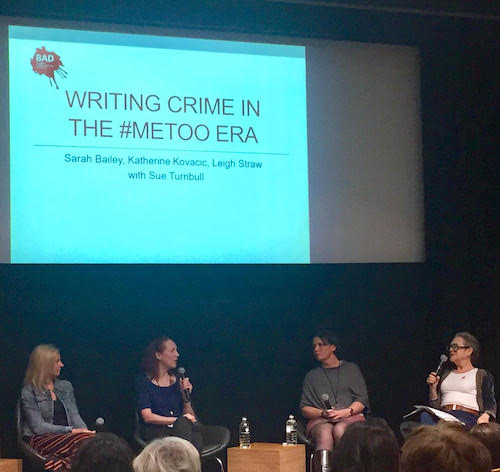 Michael Robotham with Val McDermid
There was a nice sense of camaraderie in this session. Val talked about the universe she’d created via her books and how her characters can move between them. A good thing – because she said she thinks How The Dead Speak ‘might’ be her last Tony Hill / Carol Jordan book. I loved some new characters she introduced and worried they’d be ‘wasted’, so hope to meet them again. Somewhere. 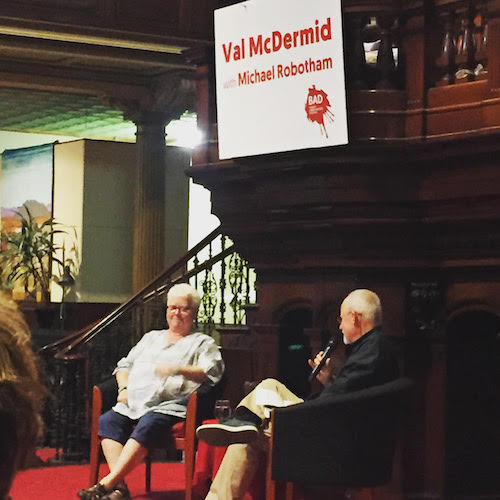 My favourite fictional detective: Kate Evans (ABC Radio) with Candice Fox, Sulari Gentill and Laurie Oaks
I’m a new fan of Sulari Gentill, who I’d heard of but not read, after meeting her and seeing her at the festival. I  have a huge list of fave fictional detectives so was a tad surprised the panel didn’t have more rolling off their tongues, but Laurie and Sulari in particular talked about some I’d not heard of – particularly those from other cultures. 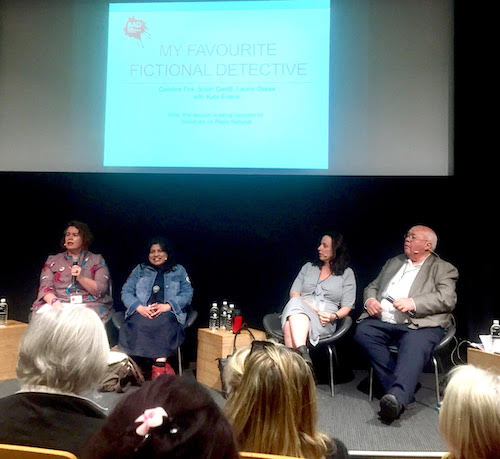 The Great Debate: Crime – is fact stranger than fiction?
Journalist Laurie Oaks moderated the debate featuring Candice Fox and Duncan McNabb (in the negative) and Michael Robotham and Xanthe Mallet (in the affirmative). Of course Mallett and McNabb are predominantly true crime authors and investigators (of sorts) themselves so splitting them (and fiction writers, Fox and Robotham) was an interesting choice, but the latter are smart and sassy and so having them both on the same team would not be fair to anyone. And, though it didn’t matter, fact (thanks to Michael Robotham’s list of reality TV shows – despite Candice Fox’s outrageous fictitious sex scenes) won out over fiction. 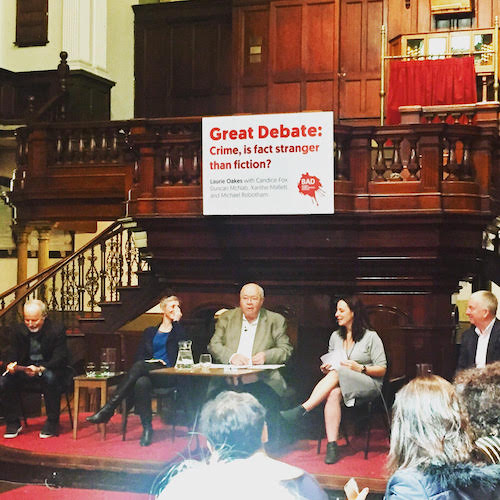 I also attended The Ned Kelly Awards (the Neddies), held in conjunction with the crime writers’ festival. And I hate to be a negative Nellie (or Neddie… see what I did there?!) but this was probably one of my least fave parts of the festival.

I mean, it wasn’t ‘bad’ but there are only 3-4 awards presented and the event scheduled for two hours. But… it felt like it dragged.

It ‘only’ cost $30 to attend. I’d expected a free drink on arrival and some nibbles and was more than happy to buy other drinks myself. But the food and wine were sponsored and I gather people weren’t overly enthused by what was on offer, as I overheard a waiter (defensively) commenting that they were just serving and not responsible for food and drinks.

That aside, rather than getting to mingle and chat between awards, speakers were scheduled and I would have liked shorter / fewer storytellers from more varied backgrounds. Although perhaps there was an ‘underworld’ Sydney theme happening? Though it ran smoothly a friend commented that there was more of a focus on the storytellers than the award winners. 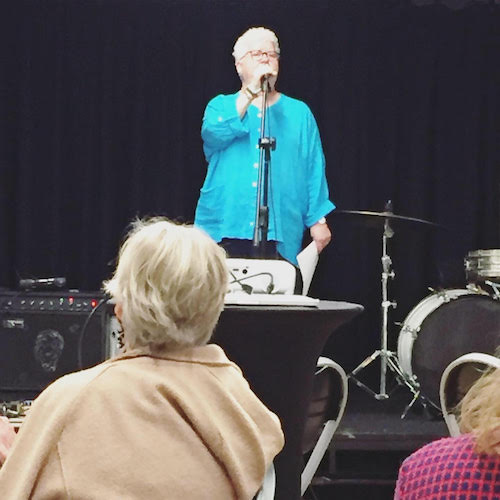 And, as an aside, though I’m a fan of Val Mc Dermid, I was a bit affronted by her comment (when presenting the award for best crime fiction of the year – which went to Jane Harper for The Lost Man) that – as evidenced by the quality of books up for awards – Australia is finally catching up with the rest of the world. There were a few raised eyebrows around my table and I’m sure most of us would suggest it’s been an issue of exposure overseas than quality of our writers and books. But whatevs. (Check out the winners here!)

That aside, it was a great weekend. I was interested that the sessions were very focussed on readers rather than the art of writing and it was great to meet up with some fellow book bloggers and online friends.

So… how was your weekend?