The media release from Penguin Random House Australia describes former-teacher now full time author Jacqueline Harvey as a ‘superstar children’s author’. I don’t have kids and am obviously not in her target audience but my local bookshop owner and another bookseller on Facebook told me her books are hugely popular.

When I met the very affable author she was in the midst of a book tour along the coastal areas of southern Queensland, appearing at schools and in bookstores. She’d already had school visits in Maryborough and Hervey Bay by the time I lumbered into her appearance at Mary Ryan’s in Hervey Bay to promote the 15th book in her Alice-Miranda series.


In a startling turn of events, Alice-Miranda unexpectedly finishes the school term earlier than planned. Holidays should be a time for fun and a chance to catch up with friends, but it seems all is not well at Highton Hall. There is trouble afoot with the family business and it's got everyone worried. Scores of people have been struck down with a mystery illness and it looks as if Kennington's may be responsible.

Meanwhile, there is an annual garden party to prepare for. And the whole village is invited! Throw in an intriguing neighbour, a runaway and a swindler and it may be the perfect recipe for disaster. Alice-Miranda will have to trust her intuition to find the key to unlock this mystery.

Regular readers will know I’m a HUGE lover of crime fiction and suspense.

I cut my crime-loving teeth on Enid Blyton’s Famous Five and Secret Seven before moving onto Trixie Belden and Nancy Drew and – only now – does it occur to me how lucky I was to have found Trixie and Nancy. As we talk increasingly about equal rights and opportunities I realise I never doubted that girls and women were smart and capable of solving crimes. Indeed, some of my favourite fictional crime fighters are female (Miss Marple, Jessica Fletcher, Rizzoli & Isles, Jessica Jones and Buffy the Vampire Slayer to name but a few).

But back to Jacqueline and the delightful Alice-Miranda, who’s not ‘billed’ as a solver-of-mysteries, but is one nonetheless.

I got to watch Jacqueline in action with young girls who approached her and her background as a teacher and deputy principal are obvious as she’s great with her young readers and knows how to engage them. And her books – rather than ramming preachy lessons down the throats of her young readers – are fun and entertaining… with some subtle life-lessons added to the mix.

She writes, she says, the books she’d like to have read when young.


Clementine Rose is fizzing with excitement. Finally, the wedding of her mum, Lady Clarissa, to Drew Barnsley is here! Preparations for the big day are underway at Penberthy House and even Aunt Violet seems to have caught a bit of wedding fever.

But all of a sudden, everything starts to feel like it's going wrong for Clementine. Her beautiful flower girl's dress might be ruined and her and Will are no longer seeing eye to eye. Could this special day turn into a wedding disaster?

Kids relate to her characters, Alice-Miranda and Clementine Rose (for younger readers) and Jacqueline’s passion for her creations is obvious. I had the opportunity to speak at length with her about her new series, targeting a similar age group to that of Alice-Miranda but offering something a little different.

The Kensy and Max series will be centred around 11yr old twins who fall into the spy game despite (or perhaps because of) their own family’s history.

The first book in the series will be out in about 6mths and Jacqueline has their overarching story arc all worked out. Each book will offer a stand-alone mystery while we learn more about their family’s history and the twins hone their spycraft with help from their uncle and grandmother.

Jacqueline already has settings for the new series in her mind and though I’ve not been to London I could almost visualise the children’s school and the spy organisation’s headquarters (with a nod to MI5). I also had the good fortune (along with some lucky students I gather) to see early images of the characters. She gave some 11-12yr old students a sneak preview, she said, as she was keen for feedback on ‘their look’ and more than happy to take it all on board. 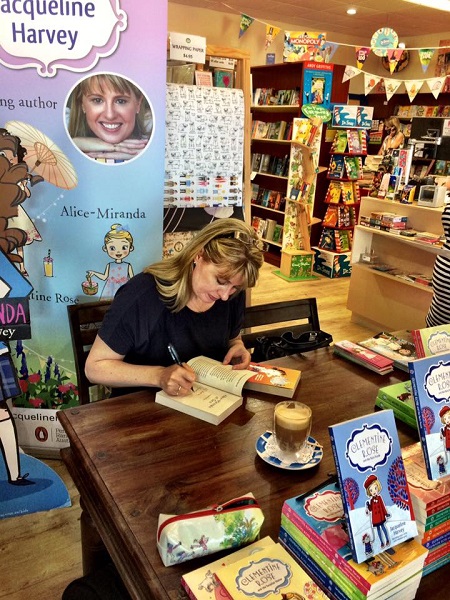 Given my whole ‘lack of kids’ thing, I don’t usually read children’s fiction and don’t really know what’s out there, but I’m heartened after meeting Jacqueline to know there are authors who respect their audience and passionate about getting kids reading.

I’d recommend a visit to Jacqueline’s website as she has some great resources on there for readers and teachers.

I (ahem) *may* have I tried the fun name generator and (in case you were wondering) mine is… Deborah Tilly Larkspur Camberwell-Cook Adams. So just entertain yourselves while I slip off to the Office of Births Deaths & Marriages to change it by deed poll. (It’s far better than the ‘elf’ or ‘stripper’ names you’re awarded on Facebook! 😉 )

Click below to check out the Alice-Miranda and Clementine Rose series from Booktopia:

via Amazon, and her latest: