It’s almost Australia Day here in Oz – a day which sees many drape themselves in our red white and blue flag, while wearing green and gold wigs and zinc cream and drinking once-Australian now-imported beer.

But meat pies, beer, kangaroos and rubber thongs aside… for a small nation (in population anyway) it seems to me we are pretty well represented on the cultural world stage. Not only have we presented the world ACDC, the BeeGees, INXS and 5SOS; but we’ve also offered the likes of Cate Blanchett, Geoffrey Rush, Judi Davis, Dame Edna Everage and the Hemsworth brothers. 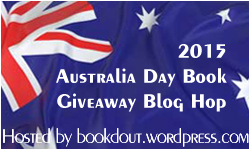 In honour of Australia Day I’m joining a blog hop (which I think is American or bookish for link-up) and offering two prize packs which include some of my favourite novels of 2014.

And I’m sharing these with TWO lucky winners.

Although I’d love to play a role in promoting our Aussie authors internationally I’m afraid the international postage would bankrupt me, so this is only open to Australian-dwelling peeps.

The attached entry form will allow you to submit an entry for either prize pack or both.

Thanks to Shelleyrae at Book’d Out for organising and hosting this blog hop thingy! Visit her blog now to check out the other sites participating in the giveaway and the various goodies they have on offer.

What’s your favourite (like ever ‘n’ EVER) book by an Australian author, whether it be a children’s book, fiction or non-fiction?

1. You must complete the entry form here.
2. This competition closes at midnight (12.00am) AEST on Tuesday 27 January 2015.
3. This competition is only open to Australian residents.
4. Only one entry per person. Multiple entries will be ineligible.
5. The winner will be drawn at random.
6. If the winner will have until 5pm (AEST) Friday 30 January to acknowledge / claim their prize.
7. In the event the winner doesn’t respond to email contact in the timeframe above, I will redraw the prize.

Prizes were provided by respective publishers – thanks to Hachette, Random House and Simon & Schuster!

NB. I want to acknowledge that there are understandable sensitivities around Australia Day for our Indigenous population and apologise for my (usual) glibness. x

This competition has now closed. Thanks to those who have submitted entries!