It’s generally suggested authors ‘write what they know’ which is exactly what JM Peace has done in her debut novel, A Time to Run.

It’s evident from start to finish the serving Queensland police officer knows what she’s talking about.

This thriller centres around Sammi, a young police officer in small-town Angel’s Crossing who—after a fight with her boyfriend Gavin—heads to the city for a girls night out with an old friend Candy.

Candy likes to party so Sammi prepares herself for minimal sleep before having to get back in her car to make it home in time for her midday shift the next day. Unsurprisingly several clubs later Candy finds herself some potential suitors so Sammi decides to head back to Candy’s alone. 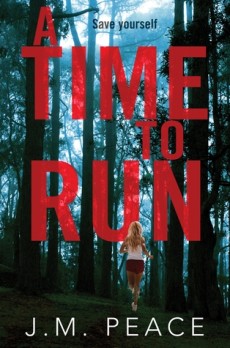 It’s Gavin who raises the alarm the next day when he hasn’t heard from Sammi and when they realise she never made it home from the club Sammi’s local colleagues call on their city counterparts to investigate at their end. And unfortunately it’s not long before Detective Senior Constable Janine Postlewaite and partner are able to link Sammi’s disappearance to a spate of similar cases.

The novel essentially splits into two at this point and we have an opportunity to follow the police investigation as well Sammi’s fight for survival at the hands of a serial killer who likes to hunt and taunt his prey before murdering them.

What comes next is a fast-paced race against time and Peace does a good job of keeping the action consistent. It’s essentially ‘edge of your seat’ stuff as Sammi’s survival skills are tested against a hardened killer.

We’re in the heads of Sammi and Janine for much of the novel. I felt I got to know Sammi well and she was a realistic, strong and likeable protagonist. I also enjoyed Janine’s character but would have liked a bit more backstory on her earlier in the novel—as reference to her personal life and an old case comes after we’ve already spent a bit of time with her.

The only other thing I really noticed was an occasional tendency to be overly-specific when it wasn’t required; but this is something I’m sure Peace will refine as she continues to publish—which I’m sure she will. For example… the Brisbane suburbs where Sammi once lived / trained would mean little to people outside of the city. And the introduction to a forensic officer by name later in the novel made me think he was going to play a bigger role, which he didn’t. These aren’t big issues and may be a ‘me’ thing… ie. it *could* be that I’m a lazy reader and don’t need more information than is absolutely necessary.

But, it’s a great debut, offering both a police procedural and something akin to Survivor Queensland.

I’m featuring an interview with the elusive ‘Jay’ next week as part of a blog tour celebrating the release of this book and it’s been great to get some insight from someone who’s taken their expertise and shared it in an entertaining format.

A Time to Run by JM Peace was published by Pan Macmillan on 1 July 2015.

Given my current level of fitness I’d be pretty much screwed if someone released me into the wild and chased me down. What about you? Any hidden survival skills?