I confessed in my Sunday Post that I downloaded this book accidentally. I had no quarrel with the book itself or its Australian author, Natasha Lester. Rather, I’d assumed it to be a combination of two genres I just don’t read: romance and historical fiction.

I’ve talked before about why I don’t read romance (relationship-envy, cheesy sex scenes) but reasons for my lack of interest in historical fiction aren’t really obvious to me. And yes… I’m such a navel-gazing, self-absorbed introspective type you’d think I would have analysed that little foible. But alas… I usually just find I can’t relate so don’t even try.

But yet again… I’ve surprised myself.


It’s 1922 in the Manhattan of gin, jazz and prosperity. Women wear makeup and hitched hemlines – and enjoy a new freedom to vote and work. Not so Evelyn Lockhart, forbidden from pursuing her passion: to become one of the first female doctors.

Chasing her dream will mean turning her back on the only life she knows: her competitive sister, Viola; her conservative parents; and the childhood best friend she is expected to marry, Charlie.

And if Evie does fight Columbia University’s medical school for acceptance, how will she support herself? So when there’s a casting call for the infamous late-night Ziegfeld Follies on Broadway, will Evie find the nerve to audition?

And if she does, what will it mean for her fledgling relationship with Upper East Side banker Thomas Whitman, a man Evie thinks she could fall in love with, if only she lived a life less scandalous?

First things first. As you may have guessed, I started this book with some reticence – figuring I might as well give it a try.

And I kept reading and reading; frustrated at midnight when my bloody iPad died and I’d read (according to my Kindle app) 92% of the book. I lay there sleeplessly for a few hours wondering if I should take the iPad off the charger and keep reading. But refrained. Until first thing the next day. 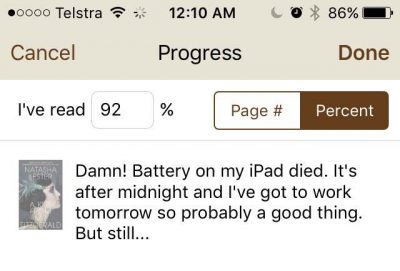 Naturally I took the time to update my reading status on my phone before trying to sleep!

So… yes – that was a long-winded way of saying I loved this book.

It’s the first book I’ve read by Lester and she scored on all fronts. The characters were great; it was eloquently written (so effortless reading); and the plot itself addictive.

It wasn’t the dreary historical piece I was dreading and nor was it some Barbara Taylor Bradford-like saga sweeping several generations.

Evie was a wonderful lead character. We’re in her head from the beginning with spectacular ease and quickly able to relate to the smart and strong-willed young woman. Lester also gives us a pretty quick picture of the other key players… Evie’s plainer but more contented older sister Viola and her middle-class parents as well as Evie’s beau – the wealthy and somewhat irresponsible (but besotted) Charlie.

Charlie’s mother was the surprise for me. I expected the stereotypical family matriarch filled with disdain for those not of her class and pride in the retaining things the way they’ve always been. But surprisingly Mrs Whitman is nothing like this and one of Evie’s biggest supporters. I was pleased Lester avoided the usual cliches in terms of ‘the wealthy mistress of the house’.

And then there’s Thomas, Charlie’s older brother. The responsible one and the heir apparent.

Evie and Charlie have grown up together but their relationship’s heading towards marriage. Evie knows she wants more and not just the kisses Mr Scott Fitzgerald promises in his novels.

There was so much she had not yet done, so much she could do – go to university, or work like women in the big cities did. If she married Charlie, the only life she would ever know was the one she lived right now, the one that chafed her like a tightly laced corset.

She’s been permitted to study literature at college but wants more. She has a passion for science and after witnessing a woman die in childbirth becomes set on becoming an obstetrician.

However… it won’t be an easy path. Female medical students can be counted on one hand in the 1920s. And it’s not only society’s prejudices and expectations Evie has to deal with, but those of her own family and Charlie.

But Evie’s determined and Mrs Whitman and Thomas become an unexpected allies as Evie sets off on a path of direct conflict with those she loves.

Much of the novel was focused around the role of women and the plight ‘modern’ women faced. I know we gals still have cause for complaint every now and again but this conversation between Evie and her mother is a reminder of how far we’ve come.

“Tell me. If marriage isn’t so wonderful, why does everybody do it?”

“Because it’s the way of the world. As a woman, it’s how you get a house. Money. Children. You’re my daughter. I want you to be looked after. There is no other way.”

Lester undertook a significant amount of research to write this novel and some of the barbaric medical practices of the time are horrific. In fact, one of the things that continues to motivate Evie is the way women in labour and mothers are treated by male doctors.

I felt the very end veered slightly into a predictable romance, but it also satisfied this hard-to-please but closure-needing reader.

A Kiss from Mr Fitzgerald by Natasha Lester was published in Australia by Hachette and is now available.

I received a copy of this book via NetGalley from the publisher. (Note because I read it via my Kindle I can’t give page numbers for quotes. Apologies for that.)

Are you a fan of historical fiction? Or women’s literature?